Illinois Republicans Donating to... a Democrat? 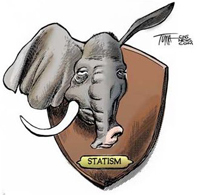 This is why Illinois politics is called “the combine.” It’s because all too often there doesn’t seem to be a whit of a difference between Republicans and Democrats — not always, but all too often. They even donate to each other’s campaigns. RepublicanNewsWatch.com has the latest examination of the sort of one-hand-washing-the-other-style of politics that has destroyed Illinois.

In this case it is the story of all sorts of Republicans donating many thousands of dollars to the campaign of Susan Mendoza, the liberal that ran (and won) for Chicago City Clerk. Donating thousands each were Republican State Reps Mark Beaubien, Ed Sullivan, Jr., Michael McAuliffe, and U.S. Representative Aaron Schock (who himself donated a whopping $10,000 alone). Also donating hundreds was State Rep Patricia Bellock. Two members of the Republican State Central Committee, Chris Dudley and Roger Claar, also donated large contributions to this major Democrat candidate.

Ibendahl notes why this is such a disgusting display of combine-ism:

What’s worse, all of the Republican officials listed above, except for Dudley, made the contributions from their political committee’s bank account. In other words, in all likelihood most of the money came from Republican donors who probably assumed they would be helping to elect Republican candidates – not liberal Chicago Democrats.

These people have no right to call themselves Republicans. I include Aaron Schock in that at this point. With his poor vote on tax cuts we are seeing that Schock is less a Republican than a Democrat lite at this point.