British Police Afraid of Local Kids, Soon to Come to the USA? 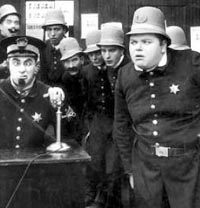 A British police chief has prohibited his own officers from patrolling a local park after dark because he and his fellows are afraid of the punks and trouble makers that infest the place at night. Thanks to a self-destructive and blind obeisance to PCism Britain has truly become an asylum run by the inmates. But this disease of PCism is one that left-wingers in America dearly want to emulate. Will the USA soon find police afraid of their own shadows, too?

Police Inspector Andy Sullivan told a meeting of the Wisbech, Cambridgeshire Town Council that he was not going to allow his officers to enter the park after 8PM because it is too dark. “The place has no lighting and it is still, in effect, a building site. I am not going to put my staff – police officers or PCSOs – into an area where they can’t see what is going on,” he said. It seems pretty plain, however, that this is just an excuse. According to the Daily Mail the park has been a “magnet for young thugs and have reported dozens of incidents of anti-social behavior. They have also found evidence of alcohol and drug use.”

It seems pretty clear that the police don’t want to be put in a position of having to arrest the kids. It is easier to avoid the whole thing than to be faced with dealing with so many underaged troublemakers.

This isn’t an isolated situation, either. Recently police in West Midlands told several Christian preachers that they’d face arrest if they went into the Muslim controlled area of Birmingham. The police told the preachers that they could not assure their safety if they went into the Muslim areas and so, for their own safety, the police said they’d arrest the Christians.

It isn’t just the Muslims that British police fear, either. British multiculturalism is so bad that police similarly won’t enter areas where “travellers” reside. In America we would call these travellers Gypsies and the multicultural disease that has infected England has forced the police to be afraid to upset denizens of these encampments even though they are generally filled with pickpockets, thieves, and roving bands of troublmakers. The police are afraid that they’ll be attacked and due to British courts backing them up these travellers can claim that police are perpetrating “ethnic discrimination against them.” So the police would rather just avoid the whole thing.

Recently police in Gloucestershire told a victim of a car theft that they wouldn’t retrieve his car even though they knew where it was. They refused to get the stolen vehicle because it was in a traveller camp.

These sort of situations are occurring all across the island nation.

The British aren’t the only ones to have police afraid of their own citizens and a government that refuses to enforce the law.

PCism has gotten so bad in Europe that these countries have abdicated large swaths of their nations to the lawless element. This is the sort of PCism that American liberals want to emulate here. How long will it be before we have lost control of great segments of our own nation just like the Europeans have?