What The Heck Happened to the Anti-War Movement? 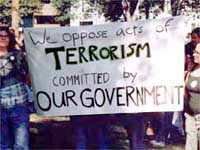 Remember those hoary days of raucous protest when anti-war protesters sent thousands of people into the streets sometimes with only a days notice? Now consider this: have you seen any of these giant protests since 2008 presidential election?

Yeah, no one else has, either. Do you wonder why that is? Well, it’s because the anti-war movement was nothing else but a hypocritical proxy issue used solely to get rid of President Bush and the Republicans. It was never about war at all. At this point this is an indisputable fact.

These days the anti-war movement cannot put more than a few dozen people in the street for its cause — which itself is little else but a proxy issue for the implementation of a worldwide socialist state.

Obviously it was never about “war.” It was just about Bush. After all, from the perspective of the issues and claims made against the Bush war policies by the anti-war left, Obama is not doing a whole lot differently in his foreign policy than did Bush. The left wanted us to shut down Gitmo. Not only are we still there but Obama signed an Executive Order to close Gitmo then just simply ignored his own one-year deadline to do so. Yet, the anti-war left says nothing.

We are still in Iraq despite Obama’s promises to be completely out six months after he became president. Yet, the anti-war left says nothing.

We’ve actually increased the number of troops in Afghanistan. Yet, the anti-war left says nothing.

Obama has even wildly increased the number of predator drone attacks in a wide “death from the skies” policy. Yet, the anti-war left says nothing.

The so-called anti-war movement is filled with partisan hypocrites. There is no other conclusion that can be reached on the subject.

Simple hypocrisy. That is all it is.

Reason TV has a great video: What Happened to the Antiwar Movement?