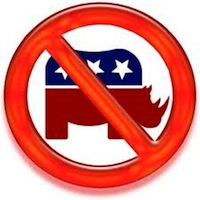 Lincoln Chafee was the bane of conservative talk radio when he was the RINO Senator from Rhode Island. Now that he is a newly minted “independent” and has become the Governor of the Ocean State, Chafee is in a position to take his revenge on the medium. And boy has this petty man used his power to do just that by banning his state employees from talking to talk radio.

Chafee has revealed some pretty warped logic to sustain his ban on talk radio, too. Through his spokesman, Chaffe said that he won’t go on talk radio because the medium is “ratings-driven, for-profit programming,” and that he doesn’t want his employees going on for the same reason.

Spokesman Michael Trainor… said the policy emanates from a belief that talk radio is essentially “ratings-driven, for-profit programming,” and “we don’t think it is appropriate to use taxpayer resources” in the form of state employee work time to “support for-profit, ratings-driven programming.”

One has to wonder which news media out there isn’t “for profit” and essentially for “ratings” — at the very least through sales if nothing else?

This is nothing but a move toward revenge. When Chafee was in the Senate he didn’t like the free political speech exercised by talk radio and now that he’s governor he’s making a move to starve the medium of something to talk about.

But all he’ll really end up doing is setting up a situation where his government will be both out of touch with the people on one hand and open to debilitating leaks on the other. He’ll also choke off an avenue for his own officials to get their own side of the story out to the public before the rumor mill is whipped up into a frenzy.

So, not only is Chafee revealing his pettiness, he’s potentially damaging his own administration.

(Note: Correction to change New Hampshire to Rhode Island. I had just written a story about NH and had the Granite State on my mind and absent mindedly said that Gov. Chafee was from New Hampshire. He is, indeed, from Rhode Island. My apologies.)