One of Obama's Biggest Donors Now His 'Economics Adviser' 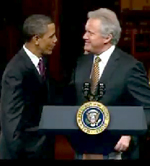 Last week President Obama appointed the CEO of General Electric, Jeffery Immelt, to head up his Economic Advisory Board. This is, as Freedomworks’ Tabitha Hale wrote, “an obvious rent seeking arrangement between Big Government and Big Business.”

This could not have been a more clear product of a crony corporatist relationship, and it is one that has no place in government that professes to value the free market. So now, we fight it.

Matt Kibbe of FreedomWorks sums it up well:

“It’s time to break up the unethical romance between government and big business. For too long, corporate elites have lobbied to profit from the size and growth of government at the expense of hard-working Americans. We’re here to let President Obama and Jeffrey Immelt know that the days of easy money through backroom deals are over.”

Let’s have a small reminder of who and/what Jeffery Immelt is, shall we?

Now, some of you out there may be confused about my post, here. “Aren’t you a conservative,” you might ask? “Aren’t you usually FOR the business community?”

Let’s face it. The only reason the extreme, left-wing Obama would be engaging in this cronyism is to rake in campaign donations and to keep bug business under his thumb to further his left-wing agenda. After all, it’s easier to control a handful of giant businesses than to control thousands of small businesses. So, if Obama can eliminate all those thousands of small businesses he’s that much closer to full control.

This is no help to capitalism. It is a detriment to it and our country.