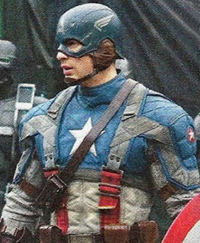 Apparently, Hollywood thinks a character called “Captain America” is too gauche for foreigners to handle. And so he’s to go nameless in such places as Russia, Ukraine, and South Korea. Once again, Hollywood shows that it is ashamed of America, it’s traditions, and culture. Thanks alot, Hollywood. This film already caused raised eyebrows for patriots when the film’s director said last year that his Captain America wouldn’t be that into America.

Last July, director Joe Johnston claimed that the Captain America in his film would not be a “jingoistic American flag-waver.” The director’s anti-American sentiment foreshadows the dropping of the character’s name from the title for overseas distribution.

I’d dare say that the new costume they designed for the captain of that unmentionable nation was created in an effort to mute the essential Americanness of its traditional comic book design, too. Not that the uniform looks ridiculous by any means. In fact, it edges toward the practical instead of the generally outlandish nature of most comic book costumes (including the original Cappy’s costume).

But the thing is the original Captain America costume is unmistakably a replication of the U.S. flag. The costume in the new movie goes out of its way to mute that effect. Where the original comic book costuming had many stripes dancing vertically across its abs, the new one has but four much broader stripes obviating the effect of the stripes part of the good old stars and stripes. Further, the new costume has various leather straps and gear fastened about it hiding the stripe effect even more so. On top of that, the red, white, and blue colors are more muted, darker than the original more brightly colored scheme of the Cappy uniform. The uniform is also replete with pads emulating a 1940s era a football uniform effect. These pads also help mute the Americanness of the design giving the eye much more to look at than the more blatantly flag-like costume of the original Captain America.

All of this is likely done on purpose so that foreign audiences can be less “insulted” that a hero would dare wear elements of the American flag upon his person.

Of course, it’s all marketing, we understand. Just as it was marketing when the 2006 re-boot film of Superman dispensed with the “American way” part of the line “truth, justice, and the American way.” Just as the 2007 G.I. Joe movie initially intended to excise the fact that G.I.Joe was an American soldier until protests made them back track.

It isn’t just the movies taking artistic license with comic book characters, either. Even the comic books themselves these days are turning out a far more Politically Correct (PC) product. For instance, last year Archie Comics introduced an openly gay character to Riverdale. Also in 2010, the Captain America comic book got into the anti-American action by having an issue where Tea Partiers were presented as a danger to America. Marvel later apologized for the attack on Tea Partiers. Finally, only a month ago, DC Comics introduced a PC hero in the Batman series that is unmistakable for its effort to avoid any real interpretation of world politics by introducing a new character in France that is serving under the tutelage of the American Batman. That new character was termed the “French savior” and is a Muslim immigrant from Algeria. Despite all the riots and troubles that radical Islam is causing France, DC chose to make a Muslim the “French savior.”

Sadly, our comic book heroes have been undergoing a PCing for years making them less heroic and more liberal every year. This new Captain America film is just one more effort in that campaign.