Leftists Use Crosshairs to Attack Walmart Over Unionization

Remember that “new tone” the left keeps talking about? Remember how they went ape-nuts over Sarah Palin’s use of crosshairs symbols on her electoral campaign map? That was “violent,” the left claimed. That was lowering the level of debate, they chirped. It was evil, they slobbered.

Well, I guess the left isn’t too upset at the whole use of crosshairs thing. After all, a bunch of left-wing, anti-capitalist, union thugs types in Washington D.C. have been using that motif on their flyers aimed at forcing retail giant Walmart into abandoning its quest to build there. And not a word has been said of it on the left, either.

Nice double standard the left has there, eh? The union supporters using the crosshair image is named Wal-Mart Free D.C. and is trying to prevent a Walmart from being built in D.C. because the retailer is not unionized, has low wages, and other meaningless issues.

And talk about violent gestures and lowering the quality of debate, instead of protesting at city hall or perhaps at the site of the proposed building, these thugs have descended upon the personal home of Dick Knapp of Foulger-Pratt Development, the company with the Walmart contract.

According to The Blaze, this group has routinely invaded the homes of its enemies.

If you’ll recall, last year a teenaged boy was so terrorized by union thugs protesting at his parent’s home that he was afraid to even leave the place.

So, while union thugs cruise in busloads to people’s homes to threaten their children and while they continue to use crosshair symbols to attack their enemies, the left focuses on talk radio and Sarah Palin all the while ignoring worse behavior on the part of their own. 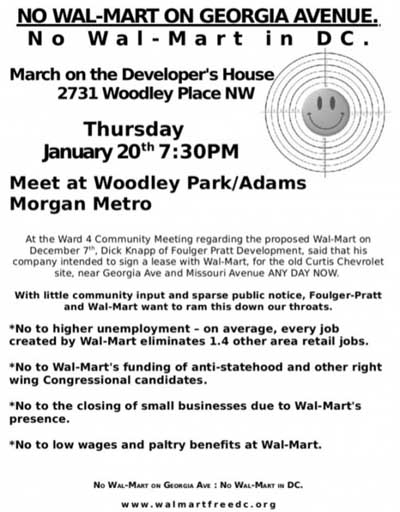