Illinois 75% Income Tax Hike on Hold, But Not For Long - ACT NOW! 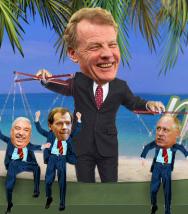 Democrat Speaker of the House Michael Madigan adjourned the lame duck session in Springfield today without coming to a final floor vote on Governor Pat Quinn’s 75% raise in the State’s income tax. Obviously he didn’t have the votes to pass it.

Madigan and his waste-loving Democrats will spend the next few days twisting arms and pushing state legislators to sign onto the further destruction of the state’s finances all in an effort to continue giving paybacks and special, sweetheart deals to the State’s public employees unions.

The legislature may be reconvened Sunday to take a vote if Madigan can get enough votes together. Republican Minority Leader Tom Cross said Friday that the Democrats have made little headway in identifying cuts in order to balance the budget. “They fall woefully short on cutting and committing to not spending new money. This is the exact reason we got into this mess…If they start spending and not cutting it will be the same mess next year and the year after.”

That’s right, the Illinois Democrats have simply just ignored the fact that they are required by law to have a balanced budget. The Democrats have not even submitted a budget bill to be voted on in well over a year.

Yet the people of Illinois have continued to vote these profligate wasters into office over and over again.

Call your representatives and tell them that if they again vote to raise taxes so that they can continue to waste money at alarming rates that you will vote them out of office.

For a list of email addresses, websites, districts and names of the Illinois state reps, CLICK HERE.

While you should contact your own state rep, of course, inside word is that there are six Republicans that are leaning toward voting “yea” on this giant tax hike.