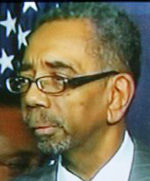 Bobby Rush always did have a lot of stones. He went from being an outlaw and criminal member of the Black Panthers in Chicago to being a legitimate, elected Congressman from the self-same city. Now Rush is hiding behind both the crime in Arizona and Martin Luther Kin, Jr. in order to push his anti-constitutional gun grabbing agenda.

Yep, a lot of stones.

Rush’s office published a blog post on The Hill’s Congressional blog section for January 16. It isn’t likely that Rush himself wrote the thing, of course, but it is published under his name and carries his imprimatur, so it doesn’t matter who wrote it. What matters is that Rush is using MLK for cover for a gun grab. What matters is that he, like so many other left-wingers, is using Gabrielle Giffords’ shooting to serve his political agenda. The Rush piece started out with a quote from King’s Letter from a Birmingham Jail. “I share these words,” Rush said of the King quote, “at a time when our nation has, once again, gone through another period of national mourning because of the wanton acts of a disturbed individual with a loaded gun.”

What King’s words from 1963 have to do with either his own assassination or the shooting of Giffords is anyone’s guess. But that Rush cynically uses them to push his anti-gun agenda is beyond question.

No anti-gun screed would be complete with false statistics and Rush doesn’t disappoint. Rush worries that the media will somehow forget the shooting in Arizona and in so doing unleashes more BS than a Chicago politician in a courtroom.

What happens when the news media and much of the rest of our culture simply overlooks the shattered lives of thousands of grieving families throughout our nation who, each and every day, lose a loved one to gun violence?

Total nonsense. If there were “thousands of families” that lost their loved ones to gun violence “each and every day” we’d see no less than 730,000 people killed by guns every year (assuming “thousands” being plural means at least two thousand victims a day). Rush’s claims are just childish hyperbole to say the least.

Next Rush misused words even more purposefully to achieve effect.

Why is it that those extremist voices, who so passionately wail about states’ rights superseding federal rights, literally jumped for joy when, in June 2010, a narrowly divided U. S. Supreme Court overturned a Chicago law that local public officials put in place as a meaningful step to help stem the wave of gun violence?

Rush is, of course, talking about the Supreme Court’s decision in McDonald v. City of Chicago, a case that found that a city cannot summarily eliminate our Constitutional rights guaranteed under the Second Amendment by legislating an outright ban on firearms.

Notice how Rush identified the supporters of the Court’s decision, though. He called Second Amendment supporters those “who so passionately wail about states’ rights.” This is a purposeful misconstruction of the issue. Supporters of the McDonald case are not going about invoking “states’ rights.” Second Amendment supporters build their position on the federal Constitution, not the issue of states’ rights. So why would Rush, an African American, be slinging around the words “states’ rights” to savage people he wants to defeat politically? I think that question is easy to answer. Rush simply made his best effort to use the code words that he felt would stir his own supporters to turn against his enemies. And what better way to do that than to raise the specter of “states’ rights” among African Americans?

And what’s this about the Chicago gun ban being a “meaningful step to help stem the wave of gun violence?” The murder statistics in Chicago, especially for its black citizens, have consistently gone up since the gun ban was initiated. How is a gun ban that didn’t stop any murders a “meaningful” way to stem the killing?

Then Rush goes on to claim that background checks would have somehow prevented the murderer in Arizona from gunning down so many people. This is also absurd. What failed to prevent murderer Jared Loughner from his killing spree has far more to do with the watered down laws governing the institutionalization of those sick of mind than it does lax gun laws.

The Arizona killer had multiple brushes with the law and was many times pegged as a mentally disturbed young man. But he was never given the institutionalization that he needed for his psychosis and that Arizona’s citizens need to be safe from his dangerous proclivities. Gun laws were the last things that could have stopped Jared Loughner.

But, you see, a discussion about our mental health laws doesn’t fit Bobby Rush’s anti-Second Amendment agenda, now does it?

In closing, Rush cynically assigned Dr. King a posthumous cause.

My prayer on the day we mark the life and meaning of Dr. Martin Luther King, Jr. is that we heed his words once again and engage in the work necessary to put an end to the carnage wrought by gun violence.

I’ll bet you didn’t now that Martin Luther King, Jr. was all about gun bans, did you? Well, don’t feel alone. Dr. King didn’t know that either.

But Bobby Rush sure did.

It’s all of a piece of the left’s misuse of facts and appalling manipulation of language in order to support an unconstitutional agenda, though.