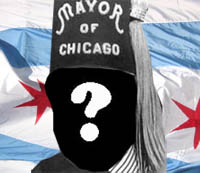 Yet another announced candidate for Chicago Mayor has dropped his bid for the top seat. Wilfredo De Jesus announced Friday that he is giving up his quest and is throwing his support over to Gery Chico.

It really looks like a three person race at this point. Rahm Emanuel, Gery Chico, and Carol Moseley Braun.

Oh, and three unknowns that have no chance at all, who don’t even have a website, and aren’t worth mentioning… but you can see their names below.

Here are the candidates that are left in the race (and more of these will be dropping soon enough, too):

Gery J. Chico – Former President of the Board of Trustees of the Chicago Public Schools, Downtown Chicago (Loop)
www.gerychicoformayor.com