Obama Tells Labor, I'm On Your Side 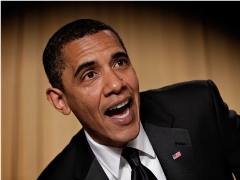 They gave him hundreds of millions of dollars for his campaign for president and for that Barack Obama has given Big Labor many, many payoffs, sweetheart deals, and regulatory favors. And this week he met in the White House with members of Big Labor and told them that he was sill on their side.

Even with all the paybacks and special favors that Obama has given to the unions in the fist half of his presidency, Big Labor is suspicious of his fealty and unhappy with his apparently insufficient level of kowtowing. And I have to say, the way labor representatives were treated in this particular White House visit does send a subtle message that Big Labor is not quite the hale fellow well met that it once was.

But don’t be fooled by the artifice. Obama made a big show out of meeting with representatives of the nation’s business community, giving them time for presentations and going to them meeting them outside the White House as if it was “a visit with foreign heads of state,” as Politico put it.

On the other hand, labor leaders were squeezed into an empty meeting room in the White House. Obama met with them for a quick meeting, allowed no time for statements and specifics of the meeting were not made public.

Obviously the White House has finally figured out that Obama’s close-knit relationship with labor unions is causing him no end of heartburn with angry voters upset over his constant payoffs to these special interests.

But don’t be fooled into thinking that Obama is truly distancing himself from Big Labor. He’s put members of Big Labor in charge of the reins of regulations that govern employer and labor, he’s put into place rules changes that favor misuse of union funds by union bosses, he’s changed rules to federal construction projects forcing costs to tax payer’s to soar. Obama has bent over backwards for unions, to be sure.

Though some labor leaders were a bit unhappy with the meeting, AFL-CIO President Richard Trumka reported that the president promised that he is still on Big Labor’s side and helped disarm the questions of the media on those things that have recently happened that Big Labor has not been happy with.

“We didn’t talk about any specific issues that occurred before today,” said Trumka outside the White House, while inside Obama delivered a speech before signing the tax bill. “The president and each one of us have stated our positions on each one of those things.”

It is certainly true that Obama is trying to lead the public into thinking that labor might be fading into the background in the president’s mind. Don’t be fooled. No president has given more special favors to Big Labor than he. Obama is driven solely by his left-wing ideology and elevating labor above and at the expense of both the economy and the business community is a major goal of his presidency.

Of course, mollifying Big Labor certainly puts the president at odds with his claims to want the country to come out of this depression. In fact, his constant give aways to labor has severely damaged our economy. His moves have been so severe that this little show of putting labor at arms length simply cannot be believed.