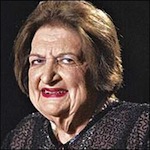 A few days ago the miserable Helen Thomas, famed long-time Washington correspondent, let her hatred for Jews get the best of her once again. At a workshop held in Dearborn, Michigan dedicated to fighting anti-Arab bias in the United States, Thomas came out forcefully against the “Zionists” in Israel and the United States and refused to back away from anti-Jewish comments she’s made in the past.

It seems that Thomas’s latest anti-Jewish comments have caused her to lose support of at least one institution: her own alma mater, Wayne State University. The school from which Thomas graduated in 1942 announced this week that it will no longer be awarding its Helen Thomas Spirit of Diversity in the Media Award to journalists that “stand out in their field.”

As Wayne State once described the award: “The award was established to recognize her leadership role in promoting diversity in the media and the issues of race in America.” It seems that “diversity” isn’t something that much interests Thomas, however. At the anti-Arab bias conference Thomas launched into yet another anti-Jew attack in Michigan. Wallowing in that old the-Jews-secretly-control-everything trope, Thomas regaled her pro-Arab audience with her anti-Zionist comments.

“We are owned by propagandists against the Arabs. There’s no question about that. Congress, the White House, and Hollywood, Wall Street, are owned by the Zionists. No question in my opinion. They put their money where there mouth is… We’re being pushed into a wrong direction in every way.

This seems to have been the last straw for Wayne State University.

“Wayne State encourages free speech and open dialogue, and respects diverse viewpoints,” the school’s statement said. “However, the university strongly condemns the anti-Semitic remarks made by Helen Thomas during a conference yesterday.”

This will come as no surprise to our readers. In July it might be recalled that Helen Thomas was awarded another fine accolade right here on the site. Thomas was awarded the number one spot in the top ten most left-biased journalists in the United States.

In that July report we chronicled nearly a dozen examples of Helen Thomas’s hatemongering and distemper. We’ve known about how miserable this woman is for decades. It’s about time that the media and her one-time supporters finally figure out the truth.