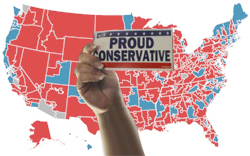 If leftists are good at one thing it is staying on message. Since 2006 when Nancy Pelosi was raised to the dizzying heights of Speaker of the House of Representatives the left has been chanting over and over that the voters wanted the country to take a hard left turn. This month’s election, however, proved that the left’s hoary claim is wrong. And we need to say so, over and over.

It isn’t that the leftists were wholly wrong in their claim that the country wanted to go left in the previous two national elections. Clearly the voters lost faith in the Republicans and just as clearly they wanted to give Democrats the opportunity of an iron clad majority to make some changes. It’s just that the left was very wrong in just how far left the voters wanted to veer — as this election proved.

One thing is sure. Democrats and their extremely left-wing money men — George Soros, the Rathkes, the MoveOnners, etc. — pushed the meme that the country wanted a quasi socialist, Euro-esque styled American government for all it was worth. They moved forward based on the assumption that the country thoroughly rejected the right and they made a mad dash for every hard left policy idea they could think of. Leftists had the help of the Old Media, too. Nearly every newspaper in the country sustained the meme that the left was in ascendance. Books such as “The Emerging Democratic Majority” and “Permanently Blue” came out to describe the permanent leftist majority and the intelligentsia talked endlessly about it. TV hosts like CNN’s James Carville made hay by saying over and over that Democrats would “rule for the next generation.” For those interested in political discussion there was no way to escape the celebratory air in the media that the left had won the political argument.

Yes, the left-wing has been very good on staying on message. Heck, leftists are so good at staying on message they are all still saying that communism would work “if only it was tried right.” Even after their cherished system has killed millions more people in the 20th century than the combined deaths from all the religious outrages in human history the left is still pining for communism/socialism. So, staying on message is definitely not one of their failings. Staying on message is one thing we need to learn from the left, certainly.

Going forward, for instance, Conservatives need never use the “C word”: compromise. It is a given that compromise will have to be accepted from time to time, of course. That is how our system is built, after all. But all this craven talk of compromise constantly coming from the mouths of Republican leaders is self-defeating. Do not use such conciliatory language. Talk the hard game and never assume you’ll be compromising. Bring the full plate of policy ideas to the table like Reagan did. If compromise must come let it be chipped from our whole set of ideas, not from half a loaf brought to the table. A contrasting president to Reagan is George H. W. Bush. He ended up being a failed president because he never brought the hard game to bear. Every policy idea he ever brought to Congress had already been compromised and Democrats chipped away even more before the final bills were signed.

Every Republican member of Congress must tell every interviewer that the voters hired the GOP to carry through conservative policies. This pretense of total victory should never be abandoned.

Certainly I am not suggesting that Republicans become a right-wing version of the uncivil, unhinged Alan Grayson — or Keith Olbermann, or Jon Stewart, et al — nor am I saying that the right should be seen dancing a jig in wild-eyed glee like your James Carville’s. That is unseemly behavior and would tend to cause a backlash against us. In fact, the childish, ungentlemanly behavior that the left constantly indulged is one of the reasons they lost the voters. I am not suggesting that we act as over-the-top foolish as did they.

No, what I am suggesting is that every Republican appear serious, steadfast, and energetic for conservative principles. Move forward always assured that we are right, that the polices we are presenting will work, and that the people back us. Never show weakness. Never start out sullenly accepting compromise. Again, let Reagan be a model.

We must not follow Obama’s petulant attitude. “We won” is not the message. “We are right” is.