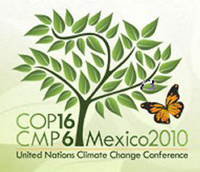 In but a few hours I’ll be headed to Chicago’s O’Hare airport to wing my way to sunny Cancun to do a few days reporting on the U.N. Climate Change Summit. As is my luck in life, sunny Cancun will be rainy Cancun if the weatherman is to be believed. Of course, weather reports aren’t the only thing going on down there that isn’t to be believed.

There has already been some guffaw inducing inanities in Cancun. For instance, an Oxfam report is telling summit attendees that “more than twice the number” of people have died from natural disasters in 2010 than have in 2009. And they tell us this is all due to global warming even though they also admit “it is impossible to link any single event with rising temperatures.”

What is the solution to the problem that Oxfam cannot prove exists? Why your money, of course. Oxfam wants the U.S. to establish a “Green Fund” of at least $100 billion annually to combat all this carnage and global warming. If a big, multi-billion dollar slush fund that’s at the beck and call of globaloney peddlers isn’t enough, summit attendees are also demanding that the whole civilized world ration itself back to the stone age to “solve” global warming/climate change.

One of these alarmist luddites thinks we should force a WWII-style, emergency austerity program on the civilized world and force us all to use less electricity and agree to cut lifestyles to subsistence levels.

“The Second World War and the concept of rationing is something we need to seriously consider if we are to address the scale of the problem we face,” says Professor Kevin Anderson, Director of the Tyndall Centre for Climate Change Research.

Of course, what makes this laughable is that these erstwhile saviors of the planet would never dream of suggesting that places like India, China, or any other nation outside of Europe and the U.S.A. be forced to this caveman-ization of western society. Everyone else is off scot free a move that makes all the sacrifice of the others a complete waste of time.

But we all know what the real goal is here, don’t we? These people really don’t care about the weather. Globaloney pushers are refugees, you see. They are refugees from the fall of the Soviet Union and the end of the era of treating communism as a serious idea. Make no mistake these people are still true believers in communism. But without the Soviet Union in which to invest all their hopes and dreams, they had nothing. Nothing, that is, until global warming became the left-wing cause du jour.

Global warming religionists merely traded their investment in communism for a new vessel in which to sink all their beloved anti-capitalist policy ideas. It’s like magic, really. I mean, communism falls and suddenly all the same ideas that the pro-communist university elite used to spout with appalling regularity is instantly applied to global warming with equal surety and ferocity.

It really is amazing.

So, as the next few days roll on I’ll be reporting on the summit in Cancun. Rainy Cancun.

Thanks to Americans for Prosperity for giving me a spot on the bus for this trip.