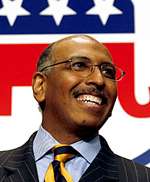 If nothing else has proven that Republican National Committee Chair Michael Steele is not in tune with the GOP today, his recent statements on the Tea Party movement should serve as exhibit number one.

Showing that he has no clue the effect that the Tea Party movement had on the 2010 elections, in a five-page memo to committee members last week, Steele said that the GOP saved the day by stopping Tea Partiers from going third party in 2010.

Daily Caller excerpted Steele’s comments on Nov. 20. “The RNC,” Steele told the members, “welcomed the energy and limited government principles of Tea Party voters and grassroots conservatives, and worked hard to ensure that their views found expression within the Republican party, and not in a potentially ruinous third-party movement.”

Given the shambles the party was in at the end of 2008, circumstances were ripe for a new party to emerge. Encouraging those millions of disaffected conservative voters to become active Republicans was at the center of the RNC’s turnout strategy.

Steele is trying to spin the situation and make it seem as if his efforts and that of the national party corralled the Tea Party movement and led the Tea Partiers to an electoral victory. Nothing could be further from the truth.

In fact, it was the ‘tuther way ’round, Mr. Steele. It was the Tea Partiers that forced the GOP to take notice, to heed policy ideas, and to glom onto Tea Party support to win in 2010.

Despite all the jaw-jaw about “the Tea Party” being a third party, there was essentially no way at all that such a thing was “ripe” to emerge in 2010. After all, the Tea Party isn’t a “the” it is a “they.” For Steele to imagine that the Tea Party movement is some sort of single, national organization ready to launch a third party simply shows he has no clue what it is.

The Tea Party movement is only a general idea, not a single entity. There are thousands of different Tea Party groups across the country and few are working one with the other. Sure there are various national Tea Party groups out there but the truth is, despite all the sound and fury of some of them, none of them can claim to be “the” leader of much of anything at this point.

Furthermore there is no Tea Party leader on a national scale today. The closest anyone has to point to as a Tea Party leader is Michelle Bachman and/or Sarah Palin, but neither claims the mantle comfortably.

The Tea Party is not like any other American political movement. In the past we had Reagan Clubs, or Goldwater Clubs, or further back the Log Cabin and Hard Cider supporters. Even the GOP itself started almost solely as an anti-slavery movement. But each of those movements was top down. These past movements were groups of powerbrokers coalesced around a single issue or personality, organized on a national scale with key local players signed up for political gains.

On the other hand, the Tea Party sprang up from the grassroots and is not controlled by the top in a way that could easily find them fielding candidates in an organized and controlled manner like past movements. Few Tea Party folks had any connection to local politics and no experience in campaigns. So, in truth Steele and the national GOP had no role is stopping any third party Tea Party effort because there is no third party effort for them to have stopped.

Could the Tea Party become a third party? There’s no reason it can’t. But there is every reason it couldn’t have as early as the 2010 midterms.

Then there is the matter of who-led-who.

The Tea Party came roaring into these midterms completely sideswiping the establishment GOP. In many cases Tea Party-esque candidates (candidates whether actually supported by, or but inspired by, Tea Party groups and/or principles) surged into the primary field beating out the party preferred candidates. It happened all across the country. Even in blue, blue Illinois where many feel that the GOP is merely a less powerful arm of the Democrats, Tea Party guys and outsiders beat state party-sponsored candidates.

Just to name a few in Illinois Joe Walsh of the 8th District, Randy Hultgren of the 14th, Bob Dold of the 10th all beat out the establishment’s picks for those offices. And each won the election after their surprising primary wins, too. Not that all three of these were Tea Party guys, but the point is that the establishment lost their control in each case. It wasn’t just Illinois, either. The establishment also lost control of their own electorate and party in Nevada and Delaware, even as those races were ultimately won by Democrats. The fact is the GOP establishment was found wanting by its own primary voters. It happened in New York, Delaware, Colorado, and most other states.

This election cycle was begun with the GOP powerbrokers haughtily discounting any Tea Party-inspired candidate and (as usual) any other GOP contender not approved of by the GOP establishment. In many cases that establishment found itself racing to catch up to what the voters wanted and being out campaigned by relative novices that DID have their finger on the pulse of the electorate.

The Republican Party establishment was unprepared for what they encountered and one can almost say that the GOP was just as trounced as the Democrats in 2010. Almost.

The final analysis shows that Michael Steele’s bravado claiming that he and the national party somehow brought the Tea Party to heel and graciously allowed them into the party is stuff and nonsense. Maybe Steele is just trying to put a brave face on this whole thing but if he truly thinks that he and the national party achieved this great victory despite the Tea Party movement, he has truly revealed how out of touch he is with what just happened.