Politico Says Florida's Allen West Will Become the Alan Grayson of the Right? 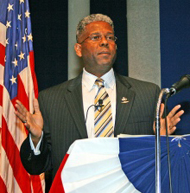 Lt. Col. Allen West is one of the most stand up guys you’ll ever meet. He first came to the public eye when his interrogation of an Iraqi yielded lifesaving results even as it was a bit unorthodox. His professional handling of that incident put him on a track to run for Florida’s 22nd District House seat, a race he won handily despite the left’s unhinged attacks upon him.

West ran a clean campaign in Florida’s 22nd. He avoided over-the-top attacks on his opponent and did not indulge fits of name-calling. This is not to say that he soft-pedaled his opinions on just how wrong the Democrats were as he sought to delineate the policy differences between himself and the left he was battling. But West did campaign with a serious tone and an even-tempered demeanor. He was not an arm waver, he did not indulge flights of fantastic conspiracies, nor did he employ vile attack ads in his race. Pointed rhetoric? Yes. Obscene, wild-eyed, foaming at the mouth attacks? Not at all.

With that said, why does Politico seem to think that Allen West is on track to become the right’s version of the despicable Alan Grayson, also a Floridian? Here is what Politico’s Kasie Hunt wrote of now Congressman elect Allen West in a piece titled, “Meet the House GOP’s Insta-Stars.” (My bold)

West, a former Army colonel, doesn’t stand out simply because he will be one of just two African American House Republicans — he’ll get noticed for different reasons. A passionate address to a tea party gathering turned him into YouTube sensation and later in the campaign he drew attention for his relationship with the Outlaws motorcycle gang. Like Minnesota Rep. Michele Bachmann, West is a strong tea party voice with a flair for bombastic rhetoric and a prolific fundraiser. Some expect he’ll become the Alan Grayson of the right.

“The Alan Grayson of the right,” Politico? Really?

Congressman elect Allen West is nothing at all like the unhinged, dyspeptic, entirely uncivil Alan Grayson. Grayson is an unserious, name-calling, loose-lipped, hater. He is not a man of intellectual heft and he certainly isn’t a man that respects others.

Grayson became so well known for his unhinged tirades and verbal attacks that he became a staple on MSNBC, the most left-wing of left-wing media outlets.

One of his most idiotic tirades occurred in October of 2009 when Grayson seemed to imagine he was auditioning for a standup up comic routine instead of acting the role of a sober member of Congress. On the Chris “Tingles” Matthews show he wondered aloud if Vice President Dick Cheney was a vampire that shot old men in the face.

“By the way,” Grayson babbled to Matthews, “I have trouble listening to what [Cheney] says sometimes because of the blood that drips from his teeth while he’s talking, but my response is this: he’s just angry because the president doesn’t shoot old men in the face. But by the way, when he was done speaking, did he just then turn into a bat and fly away?”

Not long before that Grayson took to the floor of the House and leveled the charge that Republicans want Americans to “die quickly.”

There are so many videos and reports of the hateful, unhinged behavior of this mental case that It’d take me days to write it all up.

Naturally Grayson went down screaming in his losing bid for reelection, too. He came under fire during his campaign when he ran an attack ad that distorted the truth of what his opponent said on religion. Grayson called Republican opponent Daniel Webster “Taliban Dan Webster” for his ideas of how husbands should regard their wives. But his ad was so out of context that even MSNBC took him to task for lying about what his opponent said.

Fortunately, Grayson was creamed in this election. As well he should have been. Alan Grayson was a blot on the House of Representatives.

By comparison, Lt. Col., now Congressman elect, Allen West is as mild mannered as one can imagine. For Politico to make the obscene charge that West will become the Alan Grayson of the GOP is a calumny that neither stands the test of the history of these two men, nor makes any sense whatsoever. Such a charge simply should not stand.

Now if you are a visual person, let us compare and contrast the speaking styles of Alan Grayson and Allen West in video form. First up, here is Allen West in one of the videos made of his address to the Tea Party in Fort Lauderdale.

Here is conspiracy nut Grayson in an interview he gave at Nutroots Nation in 2009 as he was running for Congress.

Here is Allen West, this time in 2009 as he addressed the American Freedom Tour in Fort Lauderdale.

Now here is Allen Grayson saying that Republicans are “the enemy to America,” and the “enemy of peace.”

And finally here is the Lt. Col. as he brought the fight to the Democrats just prior to his great win in Florida.

Last up here is a Grayson clip where he is seen calling Republicans “knuckle dragging Neanderthals.”

And just for fun, here is a video I made when another screaming mimi of the left announced his support for Grayson even after calling Grayson a nutcase.

As you can see there isn’t any similarity at all in these two men’s speaking style or ideological positions. Grayson comes off as a smarmy, intellectually stunted, foaming-at-the-mouth crazy man while West comes off as a serious, well-grounded man with clearly thought out positions, one that respects his opponents and treats them as human beings.