If You Got Cancer From Smoking, That's YOUR Problem 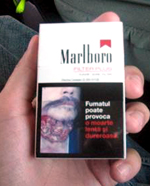 The government’s newest great idea to save us all from ourselves is to put billboard sized photos of cancer victims on packs of cigarettes. Big pictures of guys with holes in their necks, lungs blackened, maybe even the occasional really yellow teeth, or perhaps the severely calloused thumb of a smoker who was constantly flicking his Bic will assault our eyes when we go to buy our smokes.

But does anyone really care about people that have damaged themselves for smoking? Not really. In fact, the logical reaction is to shrug one’s shoulders in a too-bad-for-you-pal way and move on with your life. The fact is, no one cares if you got cancer from smoking. It is not only your problem but it’s your fault. Let’s face it, people. There isn’t a soul in this country that is so stupid that they are wholly unaware of anti-smoking claims that smoking can give you debilitating, death-dealing diseases. No one. Everyone is fully familiar with the evidence.

It is so well known that it simply goes without saying at this point. And this makes the photos a waste of time. These cigarette pack photos will not dissuade any appreciable number of people from taking up or continuing to smoke.

Now, I don’t wish cancer on anyone. But if someone is going to knowingly indulge in a habit that could exponentially increase their risk of contracting the disease, then that behavior is on them.

Sadly, this is all just one more example of an overweening, unhelpful, nanny-state effort by an out of control government.