Harvard Sick of All Those Old White Guys 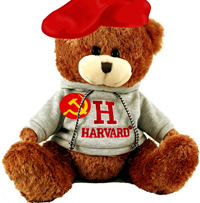 The Boston Globe is all aflutter that Harvard University is adding “diversity” to its portraits of celebrated professors, teachers, and associates. The paper is pleased to report that instead of only having upon its walls all those boring, evil, dead white men, now Harvard will be adding black men, black women, and Asians to the display.

Boston Globe clucks disapprovingly that of the some 750 oil portraits in Harvard’s collection of celebrated alumnus only two are of “minorities,” and only just over 50 are of white women. The Globe thinks that Harvard needs some “diversity” and these terrible portraits of evil white men presents an “incomplete picture of Harvard that the university is seeking to change.”

“There’s a significance to portraiture, in demonstrating to people of all backgrounds that their presence and contribution are appreciated,” said Dr. S. Allen Counter, director of The Harvard Foundation for Intercultural and Race Relations, which for eight years has been quietly commissioning portraits of distinguished minorities and women to hang in Harvard’s hallowed halls.

Of course, what we have here is not in keeping with what Harvard once stood for: excellence. Instead of a proud tradition of the best and brightest, now Harvard’s portraiture will genuflect toward “diversity,” racebaiting, and “multiculturalism.”

Is it a step away from excellence merely because “minorities” are going to be added to Harvard’s walls? Absolutely not. But what we have here is a focus on race, or “the first” instead of “the best” as the Globe reports that Harvard has commissioned portraits of the “first minority house master,” a Chinese-American named Rulan Pian, one of Eileen Jackson Southern, the “first black female professor to receive tenure,” and others.

Now, I will not disparage these people above. I do not know their accomplishments. One thing is sure though, accomplishments awarded to anyone in any university in America long ago lost its cache. Having a “degree” or being a celebrated professor no longer carries the sort of respect it once did in this country due to the horrendous dumbing down of our highest college curricula. And to that I can point to the Globe’s own piece when it reports the portrait of Harvard’s Henry Louis Gates Jr. being added to the collection.

Henry Louis Gates Jr. is a racebaiter with no real accomplishments at all, yet he is celebrated as a wonderful Harvard scholar. Gates is one of those that tend to prove that these university accolades are not worth much these days and he is also an example of a major American university placing “diversity” above excellence.

Finally there was one very telling entry in the Boston Globe piece.

“The real point of it is just to change what future Harvard students see, who arrive thinking, ‘This is what Harvard is,’ ” said Harry Lewis, a computer-science professor and former dean of Harvard College. “They can’t tell the difference between what went up last year and what went up 200 years ago.”

This fool of a professor is all puffed up with pride that his university, once one of the most prestigious universities in the world, has succeeded in destroying its student’s grasp of history. Lewis is pleased as pie that his students “can’t tell the difference between what went up last year and what went up 200 years ago.” This is a good thing, he feels. But what this really reveals is that Harvard no longer cares about the truth. It only cares about its manufactured, false world of multiculturalism, one where “the first black” this or the “first Asian” that is more important than history or true academic achievement.

Sadly, in America today a university degree is no longer proof of academic excellence. That degree is proof of only one thing: you had enough money to buy it.