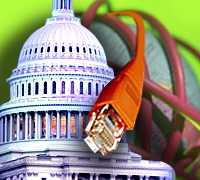 With the recent midterm election and the resulting GOP tidal wave that is about to inundate Congress, many people have wondered aloud if net neutrality was dead? Well if FCC Chief Julius Genachowski has his way, net neutrality will be implemented by fiat when he has his agency simply change rules without involving congress at all.

The results of this election doesn’t even seem to be giving FCC Chairman Genachowski the slightest pause. Reports are that he is still working on a proposal for the FCC to take over the Internet and implement net neutrality anyway. In The Hill, Genachowski is quoted saying that he fully intends to bring these rules to fruition.

“That’ll happen,” Genachowski said of creating net-neutrality rules, which would constrain how phone and cable companies manage Internet traffic on their networks.

Genachowski also touted net-neutrality regulations as one of the most important policies the country can adopt to improve its broadband deployment efforts, which he described as lagging behind other countries.

“One of the basic things we can solve [to] maintain the openness of the pipes is open Internet,” he said, referring to the net-neutrality proceeding.

There is some speculation that Genachowski may announce his new rules in the next week, just before Congress adjourns for the Thanksgiving holiday and right when its too late for our elected officials to even discuss the matter.

Genachowski may hope that releasing this controversial policy as Congress is headed home will soften the blow and give him enough time for any furor to die down and, if he’s lucky, be forgotten. Representative Fred Upton (R, Mich.), however, may not be so easily assuaged. Upton is on the upward track to leadership in the coming GOP dominated Congress and he has expressed disdain for Genachowski’s leadership of the FCC.

Recently in a memo Upton said, “The FCC’s regulatory compass is broken as it continues in its unrelenting pursuit to impose so-called network neutrality regulations, regardless of whether the agency has the legal authority for such a blind power grab, and whether such regulations will actually undermine the FCC’s ability to achieve the goals of the National Broadband plan.”