WIND’s Amy Jacobson is an elitist. There really isn’t any other way to say it. Last week on the WIND AM 560 morning show where she serves as second banana to host Big John Howell, Jacobson indulged her inner elitist by attacking William Kelly for last week’s video where he was confronted by the Old Media for having the temerity to ask a question of Mayoral candidate Rahm Emanuel.

Kelly tracked Rahm Emanuel as he walked about shaking hands with the voters in Chicago and when he tried to ask a few questions, members of the Old Media in Chicago intervened for Rham and tried to shove Kelly out of the way to protect Emanuel from tough questions. For her part, Jacobson was on the side of the left-wing, Old Media establishment. 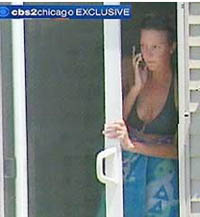 One might find it amusing that Jacobson is the one, nose in the air, attacking others for not being a “real,” professional journalist, by the way. It was she that in 2007 was discovered cavorting about in a bikini at the home of one of the people she was supposed to be “professionally” interviewing. She was fired from her TV job for this extremely unprofessional behavior. Yet this woman has the gall to be telling others how to comport themselves? As the two radio hosts reacted to the Kelly video, Jacobson revealed her complete lack of conservative credentials as well as her Old Media elitism. It is obvious that she is only putting on an act so that she can work for a conservative radio station and isn’t a conservative at all. She went without a job for quite a while, so I guess she’s proven she’ll do anything to get a job and when WIND came calling she was perfectly willing to put on airs as a “conservative radio host” to get the job.

But with her reaction to this video she proves she is one of those that imagines that “reporters” have some mythical higher status than us lowly, unworthy idiots called the voters. According to Jacobson, apparently, no one but her vaunted “real reporters” should ever be allowed to hold a microphone and ask a question of some all-important, high falutin’ politician. Citizen reporters? Bloggers? Interested Citizens? You shut up because Amy Jacobson says you aren’t worthy to speak up.

Jacobson sneered at Kelly for several things such as her contention that he misrepresented himself to Emanuel. But the truth is it is she misrepresenting Kelly, not the other way ’round. Kelly did not say he “works” for WIND radio as Jacobson kept saying he did. He said he’s “with” WIND and that is true. He has a brokered show on WIND radio. In the video Kelly said, “I do a show on WIND.” That is completely true. But he didn’t say that he works for WIND as Jacobson kept claiming he did.

In her anger that someone other than she and her approved pals had the temerity to ask a question of a politician, Jacobson claimed that Kelly was not a “real” journalist. But as, on one hand, she kept saying that Kelly is “not a journalist,” she kept saying he was practicing “ambush journalism” on the other. How Jacobson can keep saying he isn’t a “journalist” yet is “practicing” a form of journalism… well, who knows what logic that makes?

Additionally Jacobson kept claiming that Kelly didn’t give Emanuel the time to answer questions, but the fact is that Emanuel did not answer those questions in any way, time or no time. He ran away from the questions. If Emanuel had actually answered any of the questions maybe the confrontation would have ended differently.

Another idiotic thing Jacobson said is that Kelly wasn’t “respecting his elders” by trying to get in between the rotund Charles Thomas (ABC 7 TV) and the combative Jay Levine (CBS 2 TV), both reporters on Chicago TV. Another bit of elitist nonsense. She imagines that these so-called “real reporters” deserve deference? Yeah, they are “real reporters.” You want to see the big tough hard-nosed, real reporter question that Charles Thomas asked?

“You’ve been here a week, what have you been hearing from Chicagoans?”

Yeah, that is a tough question, isn’t it? Searing TV, isn’t it?

Jacobson also revealed her hatred of conservative activist Andrew Breitbart. He is also not worthy to ask questions of the government according to Jacobson. I suppose she’d be against Breitbart being allowed to talk to Rahm Emanuel, too? Of course, one has to wonder if Jacobson would appear in a bikini before Rahm if she were to interview him? Apparently that is her modus, anyway. Being a professional and all.

It is sad when radio shows present fakers as “conservatives,” as WIND has with this Jacobson woman. What ever you think of William Kelly, it is hard not to see Jacobson as an elitist member of the Old Media that has disdain for conservatives, bloggers, the voters… in short, she thinks she is better than you and me, folks. It’s just that simple.

[I am late to this because I just heard the podcast today. I am asleep during the morning show, so I missed this last week.]

Here is the take from Backyard Conservative.

Here is Marathon Pundit’s take on this story.