Democrat Representative Jim Moran of Virginia’s 8th District is seeking reelection and like all politicians he proudly displays those groups and individuals that have endorsed him on his campaign literature. But Moran has a bit of a problem with at least two of his claimed endorsements. They didn’t endorse him.

As it happens Rep. Moran has included two endorsements on his literature that simply can’t have happened. He lists endorsements from Disabled American Veterans (DAV) and the Military Officers Association of America (MOAA) but neither association endorsed him. Further neither ever endorse political candidates. To be sure that neither DAV nor MOAA endorse political candidates, I gave both a phone call and it was confirmed by representatives from those groups that they do not do so. In fact, they cannot do so for tax reasons. 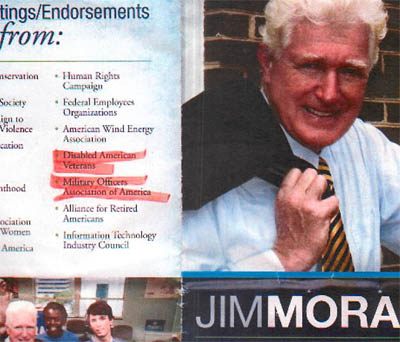 So what gives, Rep. Moran? Will you make this right and announce your… uh… “mistake”? Or will you blunder ahead as if there is nothing wrong even as your campaign literature is filled with lies?

And will rival Patrick Murray make political hay out of this Moran gaffe like he should?

Check out Patrick Murray for Congress and see.