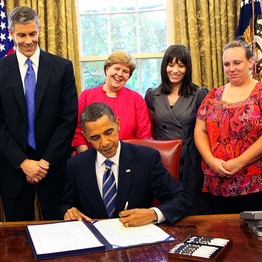 Oh, it was a thing to be celebrated when Obama’s payoff to the teachers unions back in August “saved” the job of Ohio school teacher Amanda VanNess. It was such a thing of wonder that the big guy flew the elementary school teacher all the way to D.C. for an Oval Office signing ceremony.

Happy days were here again… and it lasted less than three months because VanNess still lost her job this month anyway.

But there is good news. VanNess’s job only cost the American people $26 billion dollars. So we have that going for us, which is nice. Of course, the $26 billion was supposed to “save” or “create” jobs for teachers, wasn’t it? So what happened to these best laid plans? Turns out the school district that VanNess works for… er, I mean worked for… was in such a budget crisis that programs were cut and the money was used to try to make due. On top of that enrollment has been down in the area because families have moved away due to the depressed job market in Toledo, Ohio.

So, despite all the fan fare only a few months ago, Amanda VanNess was laid off anyway.

Sadly, much of this teacher union bailout money never did end up going to the most needy states as we found out not long after the bill was passed and signed.

Yeah, and it only cost us $26 billion to keep her employed for three months.