On The Road With the King Street Patriots of Houston, Texas

The left is in high dudgeon here in the 18th Congressional District in Houston, Texas. Democrat Representative Sheila Jackson Lee, a long-time left-winger, has held this seat since 1995 and she isn’t going to go away quietly. She is quite upset at the gall of a new conservative group that launched a poll watching effort in her district. In fact, Lee is so incensed that she has insisted that the Dept. of Justice launch an investigation of the King Street Patriots on trumped up charges that they have been harassing Hispanic and black voters here in Houston. 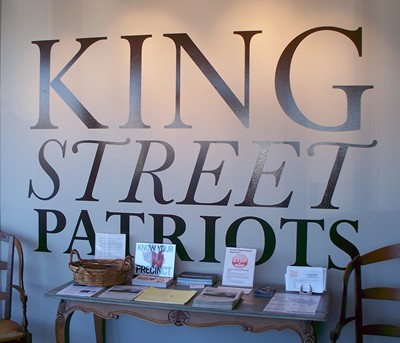 Lee has claimed that these all volunteer, Tea Party-inspired poll watchers have been intimidating minorities and has helped spread the false accusation that some shadowy, outside group has been funding them to target Houston’s minority voters.

As I have found out, though, the truth is far different than the overheated claims of the extreme left. To see for myself what the heck is going on in Harris County, Texas, I hopped a flight from Chicago’s O’Hare and winged my way to the Magnolia City to visit with Catherine Engelbrecht, chief cook and bottle washer of True The Vote and member of the King Street Patriots.

Some may recall that Engelbrecht made news back in September when she discovered that a former member of the Service Employees International Union (SEIU) had registered over 23 thousand fraudulent voters in Texas.

I found Catherine Engelbrecht and her volunteer patriots to be gracious hosts, but more importantly they are a group of true Americans entirely excited to be part of this election cycle. Many have never involved themselves in politics before the era of Obama but all are dedicated to see this election through to a fair and legal conclusion. 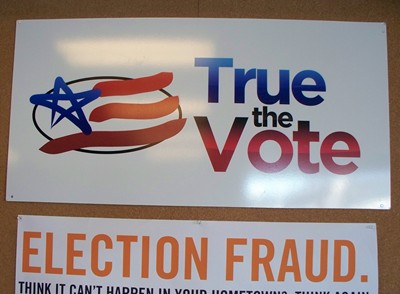 True the Vote’s self-avowed enemy is, of course, Rep. Lee. Sheila Jackson Lee is famous for many fine historically challenged speeches such as the one where she said we have “two Vietnams” living side-by-side, the one where she said that all Tea Party members used to “wear sheets” but now wear “Tea Party clothing” — whatever “Tea Party clothing night be — and who once famously asked where we could go to see the American flag that Neil Armstrong planted on Mars.

As mentioned Lee has tried to use the iron boot heel of the federal government in an attempt to tramp down the enthusiasm of these invigorated, conservative-minded citizens. But Engelbrecht and the King Street Patriots are not taking her attacks lying down. The group filed an answer to the slanderous charges in a Houston court on Friday.

The Liberty Institute has come to the aide of these patriots who have been attacked by the George Soros funded Open Society Institute as well as the Texas Democrat Party.

“As a matter of law, corporations cannot sue individuals for defamation; this attack is baseless,” said Kelly Shackelford, president/CEO of Liberty Institute, which represents Catherine Engelbrecht and King Street Patriots. “All these attacks are clearly an attempt to bully and silence a group of volunteer citizens who are just trying to keep the election process honest. This is pure desperation by a Democratic Party everyone knows is not doing so well.”

Engelbrecht went on to say, “Although I’m disgusted by these attacks, I am not deterred. Our work in Houston and our vision for a fair and free election in every county of the nation continues. These lawsuits are exactly the kind of abusive disrespect for citizens that got our political leaders into trouble. We will not be intimidated by partisan attacks, by the Democratic Party, or by anyone.”

During the press conference to announce their counter charges, True The Vote and the King Street Patriots gave their own experiences of the harassment they faced at the hands of Democrat poll judges and minority “community leaders.”

One True The Vote poll watcher was accused of being too “white” to be allowed to watch the polls in one of Houston’s minority districts, another was physically manhandled by a Democrat judge, and others were yelled at, verbally abused, and had the safety of their families threatened by so-called black clergymen of the city.

King Street Patriot poll watcher Shirley Andries said she saw clerks and Democrat judges, “literally showing hundreds of voters how to vote by ‘assisting’ them how to vote a straight Democratic ticket.” Andries said she witnessed one clerk sharply rebuke a voter that apparently didn’t vote to the clerk’s satisfaction. That clerk then ordered the voter back to the booth to vote the straight Democratic ticket.

An entire raft of left-wing groups are focusing attention on Houston in order to attempt to put the King Streeters and Engelbrecht and her True The Vote effort into ill repute — maybe even criminal convictions if they can wrangle it. In a further article I will detail some of these efforts.

But regardless of the super-charged, left-wing attack machine revving up to malign these fine folks, they are charging full speed ahead. This group is a model of how we on the right need to approach our elections from now on.

The fact is that the left have stolen a 40-year march on us all in this sort of election organizing. They’ve been stealing elections, intimidating voters, and getting out their vote for decades mostly without anyone even watching.

But new groups like the King Street Patriots are finally taking the field to hold these left-wing thugs accountable for their actions, shining a light on their fraud and deceit.

But we need to do more, conservatives. We can no longer simply ignore politics until election-day and merely cast a vote without paying attention to what the left is trying to do to this country otherwise. It is crunch time. If we don’t create our own groups all across the country we’ll deserve the destroyed country we’ll inherit. The King Street Patriots and True The Vote should serve as a model to be repeated in every state, every district in the Union. 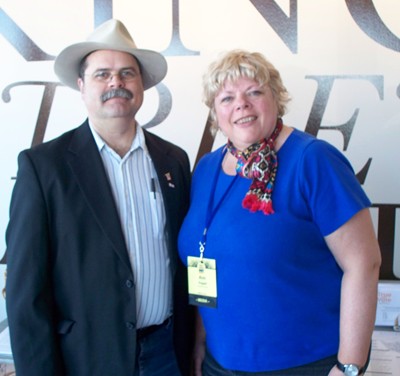 Me and my fellow blogger and Blog Talk Radio cohost, Ann “Babe” Huggett at the King Street Patriots HQ