Recently Comm Daily (subscription required) reported that an FCC decision on net neutrality was unlikely before its January meeting. While uninteresting in itself the one remarkable line in the story had to be this quote from a senior FCC official:

“While they are busy handing out waffles and making posters, we are focused on creating jobs and protecting consumers.”

The FCC official was referring to Free Press, the group that has been relentlessly attacking the FCC and many Democrats for not jumping off the cliff for net neutrality. As far as can be determined, this is the first time the FCC has ever called out Free Press for its buffoonery. And it’s about time, too. This may be a sign that the FCC has realized that the far left will never stop attacking them – Free Press’s business model depends on staying to the Left of whatever the FCC does — so it’s pointless to try to make them happy.

Who is Free Press? Taking a look at its Flickr photo stream shows why nobody, Republicans or Democrats, actually take Free Press seriously. 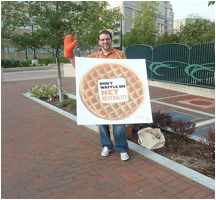 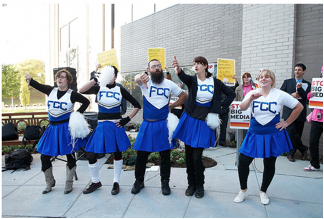 At an FCC Hearing…

Pink Lady Liberty (Sans Crown) and two other protestors looking mischievous at FCC hearing… This was not going to end well. And, BINGO, she’s escorted out under armed guard!

And who could forget… 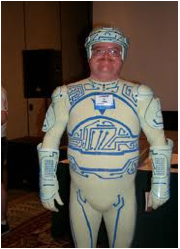 These are the people behind the Net Neutrality efforts at Free Press. I don’t know about you but I’d love to see the Tron Guy called in for a subcommittee hearing in the halls of Congress! That would be a hoot.