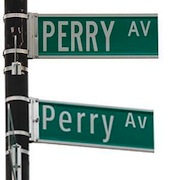 So you are a busy federal agency with lots and lots to do. You have roads to build, bridges to reinforce, and infrastructure to shore up, but there is something gnawing at your paper pushing soul. It’s those darn street signs in New York City and others. So, like a good, jackbooted government automaton, you storm down to that offending city and demand it spend $27million to change the lettering on those darn signs. I mean it’s not like you have anything else to do, right?

Well, it may seem like a joke but this is precisely what has happened. The Federal Highway Administration has demanded that New York City and other cities change street signs from all upper case to upper and lower (i.e. BROADWAY to Broadway) and it is going to cost an estimated $27 million of the taxpayer’s money to do it in New York City alone. The city reports that 11,000 signs will have been changed by the end of this fiscal year and the rest will be done by 2018.

So why is this waste of money being forced on the nation from our masters in Washington? Because the federal government has changed its street sign regulations. In all its brilliance, this federal agency has determined that all caps signs are harder to read and might cause accidents as drivers take too long to read signs while driving.

Certainly we all want the safest street signs possible. But these millions wasted all at once by federal fiat is not the right way to go. Replacing the signs when new signs are needed or using the new regulatory scheme on all new signs from this point forward is the proper way to address this situation, especially in this day when we are all taxed to death and have states and cities with budgets so far in the red that bankruptcy is a real possibility.

Yet all is not lost. In its magnanimity the feds have given the little people 15 years to toe the line before that jackboot comes down on their necks. See. They DO care about us!