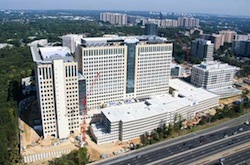 The federal government has built a one billion dollar office complex in Virginia to house some 6,400 Pentagon workers that are to be moved soon. It’s a beautiful new office complex that rises like a mountain next to Northern Virginia’s I-395. But there are a few little problems. There is no parking for one thing and for another, even if there was a parking lot for 6,400 workers, there are no roads to GET them there!

That’s right, there is no access that won’t cause tremendous traffic jams for the area. Worse, there aren’t any bus or Metro train stops anywhere near the building so workers cannot even take advantage of the Washington area’s extensive public transportation network to get to their new offices. Since the problem was fully realized the state and the feds have been arguing back and forth about the traffic problem all to no avail. No ramp from the highway has been built because the plan offered put that ramp too close to a nature area and no local roads can handle the additional traffic for 6,000 some workers.

But just think of what this means. The federal government approved the construction of a building for 6,400 Pentagon workers and never once had any idea how those workers were going to actually get to work! No road projects were approved, no parking arranged, no public transport set up.

A giant office complex sits nearing completion costing a billion dollars and no one can get to it.

This is the complete incompetence of government on full display.

And these people want to handle our vital healthcare?