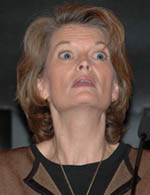 Dan Riehl of Riehl World View has a bit of a bombshell to drop on the arrogant, self-reverential “Senator of the people,” Alaska’s Lisa Murkowski — she of the second hand Senate seat bequeathed to her by her father who held that seat himself. Riehl says that it is a commonly known, not-so-secret secret in Alaska that Lisa Murkowski is and/or was a major drug addict even as she served as Alaska’s Republican Senator.

Murkowski recently lost her primary, as we all know, and suddenly she is now Mz independent because obviously having her in the Senate is far, far more important than anything as silly as the will of the voters! Perhaps her drug use explains her completely incomprehensible decision to continue running despite being turned out by her own voters?

So what did Riehl find?

It was back during the primary that I first heard reports that Alaska’s independent candidate for Senate, Lisa Murkowski, may have routinely ignored the state’s drug laws by regularly abusing cocaine. Given a lack of solid sources and Lisa Murkowski’s loss to Joe Miller, I moved on, though some reports suggested the abuse may have been habitual, even while her influential politician father, Frank Murkowski, positioned himself as something of a hardliner on drug enforcement.

After calling Murkowski’s office and getting no reply, Riehl sent five questions via email that he wanted answered regarding this rumored drug use.

1) Has Senator Murkowski ever used cocaine recreationally prior to her holding elective office at the state, or federal level? Has she ever shared same in the past, without cost, with friends and or associates, including at a then downtown Anchorage restaurant owned by her husband?

2) It’s also been alleged that this was something of an open secret within a relatively small circle of friends and associates in Alaska. If true, is that a correct characterization?

3) Has the Senator ever been confronted with said allegations? If so, how did she respond?

4) Has her husband, Verne Martell, ever been involved with a police matter in California? Did Lisa’s father Frank ever use his influence to minimize said matter, if not in essence, make it go away? Has she ever been approached by CA or AK media in this regard?

5) Finally, as it will likely be briefly re-visited in a pending item, the Senator recently spoke well of PMBR, see link below, despite its having been hit with an 11.9 million dollar judgment for copyright violation. Would the campaign care to comment as to how her experience with PMBR relates to the copyright issue? Any comment as to any concerns that the acknowledged assistance from PMBR could be construed as her having gained insight to copyrighted questions for which (bar exam) testing candidates should not have had access?

Riehl looked up one of Murkowski’s former opponents and he said he got many reports of Murkowski’s drug use when he ran against her in 1998. “I received many calls back then alleging that Ms. Murkowski used cocaine in substantial amounts for a prolonged period of time,” said Richard J. Helms.

Riehl has a lot of other anecdotal evidence concerning Murkowski’s drug use at his blog post but it all raises an interesting question. Why has Murkowski not addressed this persistent question, one that has been around in Alaska since at least 1998? One would think that Murkowski would have at least denied the allegations and moved on if they are, indeed, deniable. But Riehl could find no statement from Murkowski shooting down the rumors.

These are pretty strong charges, to be sure. Why no reply?

Now, many of you reading this may dismiss this as all just rumormongering, unsubstantiated blather, nothing to get exercised about. Of course there’s that whole media propensity to think the “seriousness of the charge” is enough to talk about this accusation until the cows come home (for you city folks that means “for a long time”).

Yet, even as the media would normally give this sort of rumor a full court press, the same media has wholly ignored this long-time rumor. One has to wonder why?

On the other hand, let us contrast the media blowing off this Murkowski rumor to its drummed up reports about another Alaska politician: Sarah Palin. Remember the idiotically absurd rumors that Sarah’s baby son Trig was actually her own daughter’s baby, one born out of wedlock?

This rumor was really one of the most idiotic rumors of the age, one easily disproven, yet the Old Media played this rumor to the hilt and for months used it as a staple of criticism of Palin during the 2008 presidential elections.

So, in light of the halfwit Trig truther rumor that the Old Media went wild to report I have to ask once again: why is the Old Media ignoring this much more substantive Murkowski drug use rumor?

In any case, it’s all a pretty good reason to vote for Joe Miller for Senate in Alaska!