A Hollywood-Like Casting Call for Obama's Oct. 'Townhall' in D.C.? 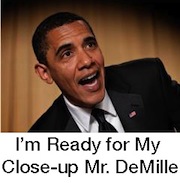 What is this? Obama is sponsoring a Hollywood-like casting call for a “diverse” audience for his upcoming October 14 townhall to be held in D.C? But, I thought everyone loved The One and would fall all over themselves to turn out in droves for an Obammessiah “townhall”? Why do they have to resort to a manufactured casting call to fill his audience?

The ad appears in the casting call section of an entertainment jobs board called BackStage.com. There Obama and his handlers, agents, writers, re-inventors, and fantasy-stylists are asking for an audience of “diverse interests and political views.” And if you believe that last bit, I have a bridge in Brooklyn to sell ya!

(Click HERE for a screen shot of the larger screen showing the website’s heading, etc. You know, just in case this casting call ad suddenly falls down the Internet memory hole.)

I suppose it is not surprising to see this sort of thing, though. After all, if the audience is carefully controlled and everyone is identified and duly paid to be there — like always, unions will surely pay their members to attend — there won’t be any inconvenient questions for The One from an unruly audience.

Of course, what we won’t get at this “townhall” is an audience that truly reflects the unrest in this country over Obama’s extreme leftist agenda, will we? All we’ll really get is fawning performances from a fake audience created by the casting directors and fantasy creators on Obama’s staff.

Perhaps, though, we might understand that things are not going well for Obama the Light Walker? Remembering that just a few weeks ago Obama couldn’t fill a tiny room in New York, perhaps it is a good idea for Obama’s Hollywood fantasy-makers to open this casting call.

I mean, what if they gave a “townhall” and nobody came? Worse, what if the only folks who came were the restless natives with their pitchforks and torches?

Finally, before you scoff and say, “Oh they ALL do that,” can you show me any such casting call ad that Bush or Clinton ever issued? If so, I’d like to see some evidence of it. Further if Bush had done such a thing, wouldn’t the left-wing media have gone crazy over such a thing. Imagine if Bush had resorted to such chicanery! The media would have gone nuts calling it a “fake” this and a “manufactured” that.