The Unethical Practices of ThinkProgress.com

Real leftists are basically the lowest form of humanity. Sadly it is all too often that many good, honest, well-meaning Democrats get tarred with the hatemongering, ethically compromised leftists among them. Here we have another example of this sort of behavior from the cretins of ThinkProgress.org with an incident that occurred on Sept. 18 at the Right Nation 2010 event in the western suburbs of Chicago, Illinois.

The unethical actions perpetrated by these immoral leftists happened in the blogger’s room as John Fund was speaking to the handful of invited bloggers, myself one of those few. Fund began to speak to the bloggers about politics and elections in the closed room and as Fund began certain of his comments he asked us to keep his comments off the record. We all immediately turned off our recording devices at his request.

But one unethical left-winger had slipped into the room and he did not heed the request to keep comments off the record. This unethical infiltrator turned on a video camera and recorded Mr. Fund’s off the record words. Then he splashed Fund’s comments all over his leftist site.

I am sure that once this story gets out, his low-born pals will slap him on the back and tell him what a good thing he’d done. But this is how the left is. Unethical, immoral… fact is they simply are not good people. They’ll steal, lie, and cheat to get their way just like this one did.

It is ignoramuses like this that have turned our political system and our media landscape toward the gutter. It is weasels like this that support Barack Obama and his Chicago Way style of garbage-spewing politics. These are the people responsible for the heightened level of vitriol in American politics. Scott Keyes, the person that did the foul deed, is uproariously touted as a “researcher for Progressive Media and ThinkProgress,” on their website. As the left loves to use high sounding words that end up ringing hollow once the truth is found out, “researcher” must be code for yellow journalist. 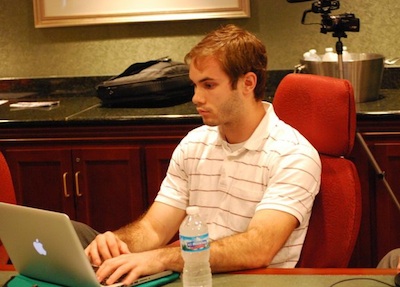 Miscreant Leftist From ThinkProgress at the event

This National Enquirer-esqe “researcher” was not invited to the blogger room, he did not pay to attend the event, and he illegally trespassed on the property under false pretenses. On top of that didn’t even have the common decency to acquiesce to a real journalist’s request for his comments to be left off the record.

Here you may be wondering if this is my word against theirs? It is not because we have video of Mr. Fund asking that his further comments be considered off the record:

Clearly Mr. Fund asked that further comments be of the record and for the edification of those in the room only. Yet this low-rent “researcher” violated the common trust that people have between each other. This is why the left is so vile. They have no decency. It’s just how these leftist jackals are.

But, as I said, they’ll probably celebrate his villainy because that is what the left is.

The folks that put on the Right Nation 2010 event is soon to release a statement about this incident and once they do I’ll update.

Now, I am sure you are wondering why I have not linked to this illicit fellow’s story. To tell the truth nothing that John Fund said was so outrageous and the story is a ho hum. The simple truth is I won’t give this one the satisfaction of linking to his story. If you are that curious, you can find it with a little effort. It isn’t really worth the effort, but you can make that decision yourself.

The real story here is the stark example of the left’s complete lack of ethics.

I also have a larger screen shot of the ThinkProgress bio page just on the off chance they put Mr. Keyes’s bio down the ol’ Internet memory hole. I’ll hold onto that just in case. 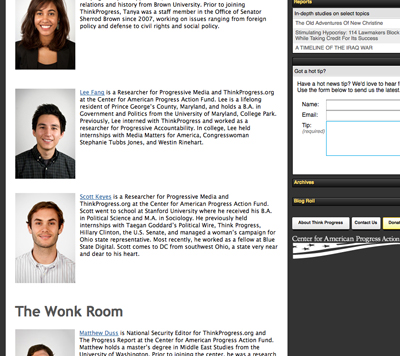 Finally, I would be remiss not to mention that this was a bad lapse in security from the event coordinators. Yes the guy lied and snuck in without authorization, but the event staff should have made sure he was supposed to be there. Let this be a lesson to any conservatives looking to put on a similar event in the future. The left is wholly without scruples and they will do anything to smear conservatives and the rest of the American people alike (as we’ve seen with their attack on the Tea Party movement). If you are holding an event, keep the security tight.

Thanks to Chicago News Bench for the video and for contributing to this report.