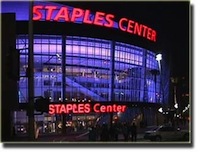 Even as supporters claim they won’t need subsidies, it is more likely that L.A. is about to plunge itself forever into debt with a new stadium, the Staples Center. A look at just about any other convention center, or stadium in the country easily shows that these projects seldom pay for themselves as builders insist that they will do. Yet, every time you turn around another city is falling for this false hope.

Unfortunately it is almost impossible for the average citizen to track where the budget money is going in any particular city budget. As we learned from Bell, California people have even been duped into making city politicians millionaires and millions have been misspent.

Cities shift funds from one department to another with such regularity that tracking it is difficult. If the City of Bell is any lesson we need far more transparency in city budgeting. But it shouldn’t be any surprise to the city fathers of LA that the Staples Center will never pay for itself. After all, the Convention Center has lost millions every year, too, and now they intend to tear down part of that losing venture to build yet another losing venture. According to the L.A. Almanac, in 2005 the convention center brought in $9,130,000. Appropriations for the convention center, however, were 21,608,518. That is an operating loss.

Even if LA wanted to ignore the constant operating loss of its own convention center, they have but to ask San Francisco whose own Moscone Center also operates at a perpetual loss. The Moscone Center takes in about $10 million annually yet has an operating cost that runs at least three million more than it takes in.

LA’s administration expects people to continue to patronize the convention center choking on the construction dust and stumbling over debris, finding little parking and confronted with constant crime in the area, as supporters build a new stadium that itself will not likely end up paying for itself.

Already news has leaked that the cost of this stadium will be over $1 billion. But even that price tag is likely two or even three times too small. After all, even if the stadium “only” costs $1 billion won’t the city have to end up replacing the square footage lost to the convention center?

Also if the city does not replace the square footage, another problem arises. The larger conventions, those that bring in the most money, will have to be canceled because the city has lost the floor space that the convention center originally had. Some that are already booked may have to be canceled and the city will be at a competitive disadvantage with other convention center across the country for future events. This all constitutes a hidden cost to the taxpayers later on.

This is all a familiar tune being played out across the country. It isn’t a new thing, either. Most people are familiar with the famous Houston Astrodome that now sits empty and unused because the city lost its national sports franchises. The stadium was built with much fanfare in 1965 and at this time far removed from its initial construction, one would assume the thing was paid for long ago. But that would be a false assumption.

As Steve Malenga reveals to us:

Take Houston. The Astrodome… There’s still $32 million in debt on a stadium originally constructed for just $35 million, thanks to some $60 million in obligations floated on the dome in the 1980s for upgrades. With no current revenues, the dome must be supported entirely by local taxes, which cover about $2.4 million in annual debt payments (which stretch for 22 years) and another $2 million in upkeep. The solution? More debt, of course. The Harris County Commissioners, who control the stadium, are looking at a plan to turn the whole place into a giant conference and meeting center, at a cost of $900 million in new debt. Either that or spend $128 million to tear the place down.

Malenga also notes similar losses in other cities. Giants Stadium in the Meadowlands, for instance, is still costing the taxpayers millions even after the complex was torn down. Further the Seattle Kingdome offers similar deficits, upwards to $100 million, to Seattle’s taxpayers and Three Rivers Stadium in Pittsburg is also in hock for $23 million, or rather the taxpayers are in hock for that obscene amount.

As we can see, even as bodies of government are tearing down stadiums and convention centers and/or proposing new construction, debt service on these and other “abandoned” stadiums (like those built all over for the Olympics) are still saddling the taxpayers with debt. It’s the worst of all worlds as taxpayers are left holding the bag for stadiums that are already not producing revenue they are forced to pay for it all ad infinitum.

Yet LA’s politicians continue to stumble toward this never ending waste of the taxpayer’s money.