Professor Bloodlust: Kill All Meat Eating Animals for THEIR Sake? 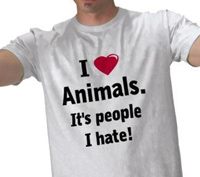 In the warped moral thinking of the extreme left, all creatures are better off never having existed for their “suffering.” This is, for instance, how in-human leftists excuse abortion. If a child was never born, they contend, he will never suffer.

Well, at least one professor has taken this extreme precept to its ultimate end. In a recent rambling New York Times piece Rutgers philosophy professor Jeff McMahan has proposed that we kill off every meat eating animal (including humans presumably) on earth to stop the “suffering” of their prey.

He proposes that we can do this either by just killing them all, or by some sort of genetic manipulation to breed out their carnivorous propensities. Why should we do this? Because it is the nice, Christian thing to do, of course. Why, think of it, we’d be ending “suffering” on earth he says.

Suppose that we could arrange the gradual extinction of carnivorous species, replacing them with new herbivorous ones. Or suppose that we could intervene genetically, so that currently carnivorous species would gradually evolve into herbivorous ones, thereby fulfilling Isaiah’s prophecy. If we could bring about the end of predation by one or the other of these means at little cost to ourselves, ought we to do it?

It’s supposedly a carnivorous holocaust this airy thinker is trying to prevent. Never mind that we humans haven’t the first notion of what such messing around with the animal kingdom like that would do… or perhaps we do. Even McMahan admits that we could cause more trouble than we might expect by such manipulation.

Perhaps one of the more benign scenarios is that action to reduce predation would create a Malthusian dystopia in the animal world, with higher birth rates among herbivores, overcrowding, and insufficient resources to sustain the larger populations. Instead of being killed quickly by predators, the members of species that once were prey would die slowly, painfully, and in greater numbers from starvation and disease.

OK, so what is this guy on about, then? The truth comes out in his very next paragraph:

Yet our relentless efforts to increase individual wealth and power are already causing massive, precipitate changes in the natural world.

Yet, even as this cloistered university type claims that he understands that mucking about with the natural world by eliminating all carnivorous species to “prevent their suffering,” he persists with the concept of doing so. Astonishingly he seems really to think he’d be preventing “suffering” in the world.

McMahan knows the opposition he will face with this concept will be stiff and he does his best to attack deniers of his concept. For one thing he says we can’t use God to deny the good sense of his point. We can’t say that we are acting like God because there is no God in the first place so we have no deity whose role we can usurp. He also poo poos the idea that if we start mucking around with nature we are acting “against Nature.” This claim too, the professor insists, presupposes that, like God Nature is some immovable, metaphysical force that cannot be altered by man and this metaphysical contention is risible in his opinion. Therefore, we can do whatever we like with our earth regardless of the consequences morally or physically. His is all an arrogant nihilist’s view for certain.

But his entire concept lacks recognition of one crucial point. McMahan says, “Again, the claim that suffering is bad for those who experience it and thus ought in general to be prevented when possible cannot be seriously doubted.” He aims to kill every carnivorous animal on earth with the aim to prevent “suffering” on this mortal coil. He even says that his idea is a Christian idea and cites the Bible to prove it. But notice that McMahan says that this suffering is bad “for those who experience it.” The problem with his logic is that suffering is only something humans can experience. Animals are not a “who,” they are an “it.”

Suffering is an emotional response to adverse situations. Sure animals experience pain and they are hardwired to experience a sort of fear in order to save their lives. But they don’t experience abject suffering like humans do. One must be self aware and aware of other’s situations to experience suffering.

Do I propose that we therefore should be able to mistreat animals at will because they can’t suffer like we do? Of course not. Mistreating animals is still wrong because it coarsens us. In this way what it does to animals is immaterial, of course. Still the constant mistreatment of animals causes humanity to have less sympathy for life itself and that lack of sympathy eventually impinges on humanity not just animals. We shouldn’t abuse animals because it’s bad for our mental and eventually physical health.

In the end professor McMahan’s entire concept is yet another nihilistic attempt to place animals on the same level with humanity and that necessarily lowers man to the level of beasts making of him no better than an insect, a fish, or a dog. This devaluing of mankind coarsens our view of the sanctity of human life and opens the door to any sort of mucking about with us, as well as the animal kingdom.

The truth is that if man is no better than an animal, if he has no higher claim on life than a bird, then what prevents scientists from, say, jiggering our genetic code to make new types of men? Worse, what prevents people from killing other people to prevent their suffering like this professor wants to do to animals?

In the end the concept of “good stewardship” is at issue here. We must be good stewards of the earth and the animal kingdom because we are higher beings over denizens of those realms. Being a good steward is what is good for us because it enriches our lives and makes of us better people. We are not good stewards because it’s good for animals. We are good stewards for our own sake and that is all that really matters. You see, without humans on earth there is no need to worry about the “suffering” that McMahan is all torn up over. Certainly no dog, no goat, no tiger, or antelope ever came up to him and engaged him in a conversation of their suffering. His whole concept is human-based emotion and has no parallel in the animal kingdom.

The whole argument is merely a mask for radical animal rights activism and that, when all is taken into account, is an anti-human ideology. But then again, he is a college professor.