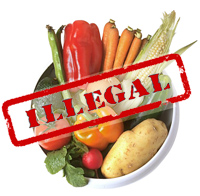 Where’s Michelle “the Green Witch” Obama when you need her? She might have been able to save a man in Dekalb County, Georgia from being sued by his own county for growing too many vegetables in his garden.

That’s right, you heard me: sued by the government for growing too many veggies.

Steve Miller plants two acres of crops each year and sells some at farmer’s markets and gives the rest away free to local residents.

How do county officials justify this harassment? Officials claim that Miller is in violation of zoning laws and has “unpermitted employees” on his property. Miller applied to get his property re-zoned but even as he did that the county continued to press its case against him. “It should go away. I think it borders on harassment,” said Miller’s attorney.

So there you have it folks. Even if we lowly citizens wanted to listen to our first lady and “veggie czar” we’d still be harassed by government for growing too many vegetables!

Imagine it, America. We now live in a nation where government tells us how many vegetables we are “allowed” to grow on our own property and if we dare to thumb our noses at officials why their lawyers and “law” officers will descend upon us like locusts to slam their iron boots down upon us.

I suppose the autocrats in Dekalb County are not familiar with Jefferson’s assertion that, “the mass of mankind has not been born with saddles on their backs, nor a favored few, booted and spurred, ready to ride them legitimately by the grace of God.”

Grow one zucchini too many and you’ll see just how fast those in government who think themselves “booted and spurred” will come down upon you.