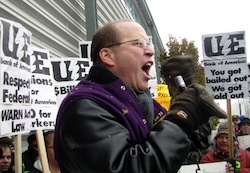 One might think it would be big news that a Chief Steward for a Local chapter of the Service Employees International Union (SEIU) is being investigated by the FBI for possible connection to overseas terror networks. Apparently, though, several Chicago news outlets didn’t see a reason to add this little fact to their stories. And even if it wasn’t big news that the FBI is investigating a union member, one would think that his profession would at least make an appearance somewhere in properly formulated coverage of the story… right?

Over the weekend the FBI announced that it was investigating Joseph Iosbaker for possible connections to overseas terror groups. Iosbaker and his wife Stephanie Weiner, both anti-war activists, are suspected of activities “concerning the material support of terrorism.” The Chicago news has been all over the demonstrations that left-wing groups have mounted in Chicago to protest the FBI’s investigation of the anti-war activists. These stories are filled with all sorts of facts, dates and names. But in a significant handful of stories one little fact seems to have escaped the notice of these hardnosed journalists. Iosbaker is an SEIU union member. And not just a rank and file member but an official.

According to the SEIU Local 73 website, Iosbaker is listed as the Local 73 Chief Steward. Iosbaker was also quite active earlier in the year protesting the closing of the Republic Windows & Doors factory that made the national news. Iosbaker was then listed as an executive board member of the SEIU.

It is interesting to note that this fact escaped most of Chicago’s TV coverage. Michelle Gallardo of ABC 7 TV seems to have forgotten to mention the union connection, CBS channel 2 also missed this fact, WGN TV channel 9 also forgot to mention the SEIU, and Channel 5 NBC also missed it, all accidentally I’m sure.

But it isn’t just TV that missed this fact. The Associated Press also seems to be blind to the fact that Iosbaker is a union operative.

My friends at the Chicago Daily Observer have helpfully offered the Old Media a spelling lesson, “SEIU, it’s spelled S-E-I-U,” they scolded.

The fact seems to be that Iosbaker is not just a little fish in the big union pond. He is at least a middle manager and local union muckity-muck. So why did so many news outlets somehow forget to mention this fact? Isn’t his status as a union operative with some station and position significant?

One is tempted to think that these news outlets were trying to cover for the SEIU.

Click here for a screen shot of the SEIU’s website just in case they relegate Mr. Iosbaker’s mention on the web to the Internet memory hole.