After Denial, Anti-American Faculty of UIC to Fight For Bill Ayers's Emeritus Status 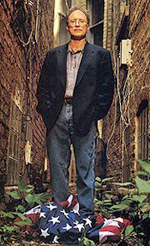 The leaders of the faculty of the University of Illinois at Chicago are weighing whether they will wade into the fray and come to the aid of a terrorist.

Last week the board of UIC denied domestic terrorist and close Obama confidant William Ayers the emeritus status he sought upon his retirement. The reason he was denied is due to his own words as laid down in the dedication to his 1974 screed.

In that dedication, Ayers celebrated murderer and political assassin Sirhan Sirhan, the man who killed Bobby Kennedy as he ran for president in 1968. Unfortunately for Ayers, though, it just so happened that the son of Bobby Kennedy sits on the same UIC board that Ayers had to appeal to for his last little undeserved academic plum. At Kennedy’s urging, the board denied the domestic terrorist’s accolade.

Disgustingly, these university pinheads are blaming the board for denying this killer his last little celebration and claiming it is the board, rather than the terrorist, who is at fault here. These amoral faculty members are upset that Kennedy made Ayers’s case “personal” rather than “academic.”

Ayers celebrates the murderer of the man’s father and these faculty folks don’t see that as personal? Seems to me that Ayers is the one that made it personal when he celebrated a murderer!

One of the reasons this cretin was denied emeritus status is because rules state that the honoree should reflect well on the institution. A domestic terrorist, guilty of murder, and one who celebrates the assassination of American political figures… how does such a creature reflect well on any institution?

Further, how could any patriotic faculty member even dream that this villain could reflect well on the university? Ah, but we know why these ivory tower pinheads think that Ayers is a perfect representative of the university set, don’t we? Because they all think exactly like Ayers does. They hate America, too. So in him they see a kindred spirit. And so these pampered profs that make their living off the taxes of the very people they despise — that would be we the people — have elected to sit down and decide if they should come to the aid of this monster.

So, let’s see. A guy that has a history of despising the United States and committing armed insurrection against her, a guy that advocated for the violent deaths of any number of her citizens, a guy who, with his wife, actually participated in at least one bombing where a police officer was killed, a guy that has never expressed any remorse for his actions, and a guy that has never paid a price for his treasonous and murderous actions is just the sort of guy that the faculty of a prestigious university would go to the mat for? Is that what we have here?

Yep, it appears that terrorist William Ayers is just the kind of creep that university professors love.