About that first woman executed in US in 5 years ...

OK, the story is all over the Old Media edifice: forty-one-year-old Teresa Lewis has become “the first woman to be executed in the U.S. in five years.”

Every news outlet from TV and cable, to newspapers, to radio, to the Internet is using this line, this “the first woman to be executed in the U.S. in five years” line. They are all playing the same narrative.

So, here’s the question I have. How exactly can anyone be the “first” anything “in five years”? Doesn’t the whole “in five years” presuppose that someone else came first? See, the one “five years” ago was at the very least the real first one, not the one that came today. And in this case, the real “fist” woman executed came over a hundred years ago. See that woman was Lincoln assassination conspirator Mary Surratt. And that is only the “official” version of events because one could easily count those women hanged for being witches in the famed Salem Witch Trials way back in the 1600s (though this country wasn’t quite “the United States” yet, granted).

Why, then, is this language being used? Why so that this murderer’s execution somehow sounds like a bad thing, that’s why. If we say “the first one in five years,” we make it all seem so outrageous, so shocking. And that heightened emotion is applied to the execution making many people feel that it is somehow untoward.

The truth is, though, that this woman got what she deserved. There is nothing at all untoward in her elimination from society. She does not deserve the distinction of being known as any “first” anything.

And as the Old Media establishment tsk tsks America after executing a woman that confessed to her crime, underwent an extensive trial with proper representation, and saw years of court procedures, can we remember what is going on elsewhere?

How about the 1983 hanging of ten women by the Iranian regime? Why were they murdered by the mad mullahs? Because they dared believe in the Baha’i faith, a religion that Iranian authorities had banned. One was only 17 years old and was tortured by the Iranians before she was hanged. 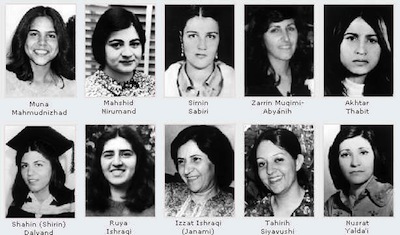 But, heck, we don’t have to go all the way back to 1983. Women are commonly raped, murdered, and executed by hanging and stoning by the “religion of peace.”

Excuse me if I don’t feel so bad for Teresa Lewis.