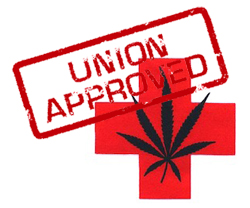 Can you imagine the Teamsters mellowed? Can you think of them being more interested in munchies than in beating up non-union workers? Imagine them just hanging out instead of doing some mobster’s bidding on the mean streets.

The good news today is that we may finally see the violence and agitation in which Teamsters have for so long been embroiled come to a mellow end because California’s pot growers have joined the union. Maybe the dopers will spread the mellow?

In California, the teamsters have organized 40 marijuana workers. They work as gardeners, trimmers and cloners. It’s not clear how labor laws will apply to this situation, since medical marijuana is legal in California but is still a federal crime. Still, the workers got a new contract and a raise.

But we can dream, can’t we?