Why Is Ground Zero Mosque Connection to Sharia Law Push Being Ignored? 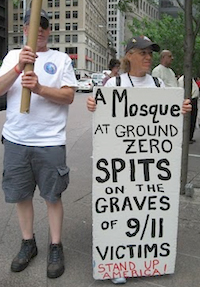 With the shocking report by Christine Brim revealing that the folks involved in planning the Ground Zero Mosque are heading a major push to get Shariah law forced upon the United States, one has to wonder why this startling fact has not become the talk of the town among the Old Media and the chattering classes? One would think that this news would be a final nail the coffin of legitimacy that this GZ Mosque plan ever had.

Brim asked an interesting question about the Ground Zero Mosque building’s actual blueprints. What are the six currently unassigned floors going to be dedicated to? Brim found that nine of the 15 floors seemed to have been assigned to some purpose or another but six have not been identified as going to any particular purpose. As Brim says, that’s an awful lot of empty office space. To answer to her curiosity, Brim began to research the website of mosque planners Cordoba Initiative. What she found there should shock us all. There she found that the head of the project, Imam Feisal Abdul Rauf, has been involved in a series of conferences to push Sharia law throughout the world.

Brim found segments of the Cordoba Website that have recently been scrubbed, segments that show that Rauf is a participant in pushing radical Sharia law on the United States and other western countries through an effort called the Shariah Index Project. The goal section of this scrubbed part of the Cordoba Initiative’s website announced that it intended to “define, interpret and implement the concept of the Islamic State in modern times.”

In fact, the implementation of harsh Sharia laws was a major contributing factor in America’s decision to go to war against the Taliban. The depictions of the stoning of young women, the “laws” against music and dance, the destruction of the Bamiyan Buddhas, all this added to America’s disdain of the Taliban. After all, the evils of Shariah law oppresses women, minorities, and eliminates even the smallest chance at religious freedom.

Yet here is this Imam who is cynically going about preaching to America that we are being intolerant of his religion not to allow his Ground Zero Mosque, a project that even other Muslims now say is little else but gloating about the “success” of 9/11, being involved in an effort to push the single most intolerant, oppressive set of so-called laws currently leveled against humanity. He calls us intolerant yet wants to force us all to this backwards, hateful mockery of law!

The news that Imam Feisal Abdul Rauf is a pusher of this anti-American agenda should be enough to thoroughly discredit his claims of desiring religious tolerance in America. Yet this news is being ignored. One has to wonder why that is?