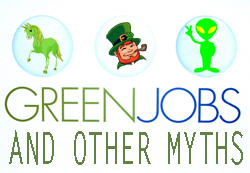 The United Auto Workers has announced that it will join a coalition of unions called the BlueGreen Alliance in an effort to push “green jobs.”

I was amused by what BlueGreen Alliance founder Leo Gerard said of this addition to the group.

“The American auto industry is poised to lead the world in the production of cleaner, more fuel-efficient cars and advanced vehicle technologies,” said Leo W. Gerard, International President of the United Steelworkers, a founder of the BlueGreen Alliance. “The members of UAW, working people who make America’s vehicles, are a welcome addition to our effort to create millions of good jobs while protecting the environment for future generations.”

Notice how he lumps his union pals in with those creating those new “advanced vehicle technologies.” The unions don’t have as much to do with creating that new technology as it does in merely building them after they’ve been designed. He takes a bit more credit than he deserves. Still, the main problem with this alliance isn’t that they are taking too much credit for other people’s work, it’s that the idea of “green jobs” is a farce in the first place.

Tony Blankley addressed this issue back in May of 2009. After Obama announce that his green initiatives would “create five million green jobs,” Blankley looked to Spain, a county that has already tried this game, to see how it fared. He found that it didn’t fare so well.

Spain’s efforts have been looked to as a leading effort in the field of “green jobs” but the results are less than thrilling. “Only 1 in 10 of the green jobs created was a permanent job operating and maintaining the renewable sources of energy,” Blankley writes.

The central finding of the study is that – treating the data optimistically – for every renewable-energy job the government finances, “Spain’s experience … reveals with high confidence, by two different methods, that the U.S. should expect a loss of at least 2.2 jobs on average, or about 9 jobs lost for every 4 jobs created.”

Each green megawatt brought on line destroyed 5.28 jobs elsewhere in the economy (8.99 by photovoltaics, 4.27 from wind energy, 5.05 by minihydro power.) The total higher energy cost – the amount renewable energy cost more than available, conventional market-price energy – between 2000 and 2008 was about $10 billion. Moreover, the report concludes, “These costs do not appear to be unique to Spain’s approach but instead are largely inherent in schemes to promote renewable energy sources.”

So why are all these unions pushing this green nonsense? Because they expect that their pal in the White House will funnel all the so-called green jobs to them while the non-unionized workforce loses jobs by the millions.

And that is a good bet, too.