This Just In: Washington Post's Milbank Admits He's a Lefty, But... 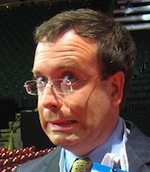 It almost sounds like the set up to a “guy walks into a bar” joke — or maybe a knock-knock joke — but the Washington Post’s Dana Milbank made an assessment of his own political ideology that can’t help but draw a laugh.

As WaPo columnist Howard Kurtz reports, Milbank is being moved to the Post’s editorial pages. But it is what Milbank said of himself that amuses.

“Anybody reading my column would make an informed judgment that I’m left-of-center, and I wouldn’t quarrel with that,” he says. “But strongly ideological people on the left do not recognize me as one of their own.”

I see. So because the wholly whacked out fringe of the far, far left (see the Communist Party USA, George Soros, or MoveOn.orgers) don’t consider him a sufficiently whacked out, moonbatty lefty to suit them… then what, Dana? Is that supposed to be some sort of mitigating factor for Milbank? He admits to being a leftist, but because the most fringeworthy left doesn’t accept him are we supposed to slap him on the back and welcome him to the right side of the aisle?

But let’s have some fun with Milbank’s distinction-without-a-difference style of reasoning. Let’s take his logic and see what other situations we can excuse using it…

There are all sorts of ways you can use Milbank’s logic to explain yourself away, but the most common one is the one almost every 12-year-old boy used on his mom: “But mom, Jimmy did it, too.” Yes, if Jimmie did it too, why Mom should realize that whatever was done must not be so bad.

Yes, Dana, if the fringe left thinks you aren’t left enough for them, I guess the fact that you admit to being a leftist isn’t so bad. After all, Dana, Jimmie is a leftist, too.