Survey of Dem's Most Loved Republicans: A Guide on Whom to Fire? 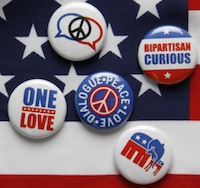 The Hill conducted its annual survey of how congressmen feel about each other and the answers are instructive. The survey found that Speaker of the House Nancy Pelosi (D. Calif.) is the most partisan, unwelcoming, hard to work with politician in all of the House of Representatives. But the list of Republicans that congressional leftists love should serve as the list of those voters should fire in November and after. (And Illinoisan Judy Biggert seems to lead the pack)

The Hill, however, did have an interesting point on why the extremist, left-wing, loud, hectoring, shrill Pelosi has been able to so easily get her anti-American policy agenda through Congress. She has a willing and able assistant in Steny Hoyer (D, Md.), a man that many congressmen like and find not to be the wholly leftist ideologue that Pelosi is. As The Hill puts it, it’s sort of a good-cop-bad-cop relationship. The shrill Pelosi makes her extremist demands but it is the smooth, seemingly moderate Hoyer that gets people to sign on to those demands.

Of course, this whole survey proves the lie to the claim that Hoyer is a moderate. After all, if he truly was a steadfast conservative Democrat he wouldn’t be acting the convincer to Pelosi’s extremist agenda and helping her get every far, far left idea of her dreams made into law.

The Hill marks these congressmen as those that Democrats like most:

There is only one reason why Democrats would love these folks: it’s because they are reliable votes against their own party.

So, this survey from The Hill is quite instructive. It gives us the congressmen that are most ideologically driven and helps us know which ones have no principles at all. Kudos to The Hill.