Reminder: Obama's Played More Golf in 2 Yrs. Than Bush Did Both Terms 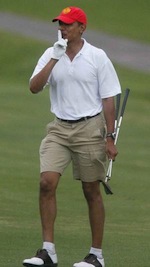 Between 2000 and 2008 one of the left’s most cherished ways to ridicule President Bush was to point out how often he went golfing. Bush’s golfing was a clear sign that he was ignoring the work he had to do in Washington and that he just didn’t care they claimed. He was a playboy, a goof off, a time waster. But now that Barack Obama has come to office all of a sudden the left has found that golf isn’t worth noting, even as Obama has played the game more in just under two years than Bush did during his entire eight-year term.

The word hypocrisy comes to mind.

In 2003 President Bush decided to give up golfing because he did not want families of wounded and KIA soldiers to see him playing a game while they served and died in Iraq and Afghanistan. Being seen on the golf course in wartime hasn’t seemed to deter President Obama, however. Obama even skipped the funeral of the leader of Poland, a most staunch ally, to go play golf. Few in the Old Media seemed very worried about it.

But for Bush it was different. Even propagandist filmmaker Michael Moore used golf against President Bush. In his film Fahrenheit 9/11 the rotund spoofer used a clip of Bush golfing to attempt to make him seem out of touch. Additionally, Bush’s golf game was meticulously covered by the Old Media and used to make him seem tone-deaf.

But as far as the Old Media is concerned, Obama “needs some downtime.” His golf is nothing to be worried about.

Just a reminder of the hypocrisy of the Old Media and the American left.

In the comments it was pointed out that I did not thoroughly read one of the links I put in this piece. Apparently I did not see that Obama claims he didn’t go to the Polish President’s funeral because of the volcanic ash loud that threatened Europe’s airspace at the time. I can only say that I guess I saw “golf” and “skipped the funereal” and after that I just stopped reading the story. I apologize for the sloppiness.