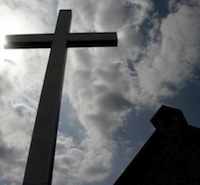 As the left falls all over itself to claim that building the Ground Zero Mega-Mosque is the perfect chance to “showcase” our “Constitutional freedoms” and our religious tolerance, there is another state where religious tolerance is not as noticeably on display as it is for New York’s Muslims. Naturally, in Vermont, it is the religious freedom of Christians being denied. To be sure, the Old Media is not nearly as interested in this story.

Richard and Joan Downing own a hilltop property in Lyndonville, Vermont and on that property they’ve built a family chapel where they host weekly Catholic services for all. Next to the chapel they have also erected a 24-foot-tall cross called the Cross of Dozulé, a cross that the State of Vermont is insisting that they remove. (Visit The Chapel of the Holy Family website)
How does the State of Vermont justify its demands that the family pull down the cross? Vermont officials are citing environmental regulations that give it the power to determine what sort of construction violates the “aesthetics” of Vermont’s scenery.

Now in their seventies, the Downings built their Catholic chapel in 2005 to serve their large extended family. The Downings’s chapel is used by their seven children, three of them adopted, and the 35 foster children they helped raise over the years. The chapel is also open to the general public.

The Cross of Dozulé, or the “Cross of Love,” is an homage to those erected by Catholics in thousands of places across the globe. Some Catholics believe that the cross is a reminder for humanity to avoid spiritual decline by submission to God’s will. It is also, they believe, a reminder God’s love for us. As such it is to be fully lighted at night so as to be easily seen.

It is the lighting of the cross that initially caused the problem. Some neighbors complained that the lighting was too bright and it seems that this forms the basis of the State’s decision to force the family to pull the cross down.

The family has since changed the lighting so that it isn’t as bight at night.

The regulations in question, Vermont Act 250, is a law written in the 1960s meant to stop out-of-state “hippies” from buying local property and pitching tent cities there creating eyesores and sanitation hazards. The regulation requires landowners to get land use permits before construction.

This case contrasts nicely with the Ground Zero Mosque, though. In New York a Muslim Imam that is well known for wanting to push Sharia laws on the U.S. — a foreign concept that would destroy religious liberty where instituted – is seeing his rights being touted as preeminent. On the other hand in Vermont a family that only wants to display a cross to inform viewers of God’s love is having their religious freedom denied.

It is instructive to note which story is most covered in the Old Media. The rights of the Muslims in New York is the talk of the media while the rights of the Christians in Vermont is practically invisible in that same media establishment.

I guess some folks’ religious freedom is more sacrosanct than that of others.