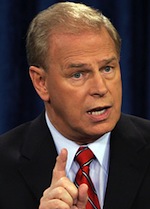 What was it that Democrat President Barack Obama told us about the stimulus? Oh, yeah that it would “save or create” American jobs. Seems like a good idea, right? So what happened in Ohio when Democrat Governor Ted Strickland got his mitts on some of Obama’s stimulus cash? Why he gave it to a company to fund a call center that is operating out of El Salvador, Central America, of course.

Jobs for Americans? Heck no, jobs for El Salvadorans! And why? Because it was a good deal, you see?

Earlier this year Governor Strickland’s Department of Development awarded a $171,300 contract to a company named Parago. This company was hired by the state to operate a call center that Ohio residents can call to take advantage of a rebate program that the state set up so that Buckeyes could buy new household appliances and get a little sumpthin’ back. Apparently everything was going wonderfully for most of this year until one Ohio resident happened to ask one of the El Salvadoran phone jockeys where the call center was at which they were taking the calls. When the Buckeye was told Central America, said resident became incensed that federal “stimulus” money was going to fund jobs in El Salvador instead of in the United States — like Obama promised it would.

The Cleveland Plain Dealer got wind of the incident and blew the lid off Ted “El Jefe” Strickland’s Central American call center deal and the rest is, as they say, el historia.

But wait, Gobernador Strickland is sure to point to the amount of money he’s saving the peons of Ohio as justification for the effort. You see, the Ohio based call centers had submitted bids of well over $200,000 but the one based in Central America, why it had the lowest bid. See….el Teddie is saving money.

Of course, it is a bit hard to explain to those Ohioans that are out of work that the state saved a couple thousand dollars while they can’t afford to buy groceries for their starving kiddies. But… well, you know. It isn’t for us to question the brilliance of the Democrats and their efforts to “save” the economy. Right?