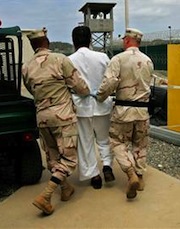 After the heming and hawing by the Obama administration over whether we should bring terror suspects to trial before military commissions, Obama’s DOJ and DOD finally decided that they could. But once again we see the half-way actions of the Obama administration shining through by the fact that, even as Obama seems to agree with the Bush administration policy of military tribunals for terrorists, the president hasn’t made a single plan on what to do with any of those terrorists after they are convicted.

In any case, the Obama administration has allowed several military cases against terrorists to proceed, but what will happen if they are convicted? What will the government do with these dangerous people? Sadly, no one knows.

“This is troubling,” said Judge Nancy J. Paul, an Air Force lieutenant colonel, noting that two cases are being heard in commissions this month at Guantanamo Bay. She said “no written plan, no written policy or directive exists” about where to put convicted war criminals here.

This is a dereliction of policy planning that should shock everyone and it shows the practical incompetence of this administration especially in foreign policy and defense.

Then again, if the Obama administration doesn’t plan on actually convicting anyone, perhaps not having a plan on where to “house” the convicted is a meaningless lapse in planning? After all, if you don’t have any convicted terrorists to “house” then who needs to make plans?

Perhaps this is less a lapse in planning then a “tell” on what the administration truly means to do with these terrorists. Perhaps these trials are all for show and not meant to actually convict anyone?