It's The End of Days: A Hanna Montana Tribute Act??

For a Sunday headshaker, My Chicago friend Pat Hickey has alerted us to a catastrophe of Biblical proportions. The Seventh Seal is broken, he says. Why is it the end of days? Because there is now a Hannah Montana tribute Act out there plying your local Summerfests and carnivals. 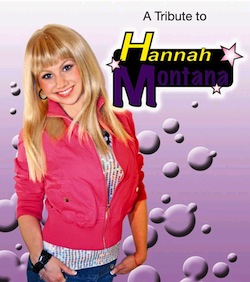 Seriously. A Hanna Montana tribute band? If it isn’t the end of days it’s at least the end of entertainment. Here we have a young girl recreating a fake girl, in fake hair, doing a fake act, for a non-existent band. It is so many levels of manufactured “entertainment” that it boggles the mind.

Nonetheless we now have the lovely Jennifer Walls who, we are told, “is the next best thing to the real show!” (Explanation point and all)

Amusingly, the website even spells Hanna Montana wrong… “Jennifer Walls portrayal of Miley Cyrus and Hanna Montan is incredible. She has the look and the character down to the smallest of details.”

So, folks, if you want to see Hanna Montan, apparently our little miss Jennifer Walls is the one to see.

But don’t be surprised if when she bounces on stage a great chasm opens up before you and the world burns to a cinder or something equally apocalyptic.