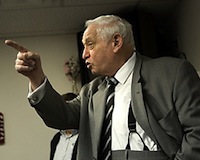 Two political workers for Chicago Alderman Bernard Stone (50th Ward) have been convicted of vote fraud and were sentenced to one year in jail on August 4.

The pair were convicted of attempting to manipulate absentee ballots in Stone’s tough 2007 re-election campaign. The workers, Anish Epsen, 40, and Armando Ramos, 36, were given 364 days and 270 days respectively, convicted of attempted absentee ballot violations, a misdemeanor. The pair faced several felony charges, but the judge only sentenced them on the misdemeanor charges.

Instructive is the reaction of boss Stone.

Reached for comment Wednesday, Stone called the case “a witch hunt” and said Eapen and Ramos are “political prisoners.”

“They were convicted of misdemeanors — misdemeanors that are no longer crimes,” said Stone. “Not felonies, misdemeanors, like spitting on the sidewalk.”

According to Stone, trying to steal an election is as low a violation as “spitting on the sidewalk.”

It is obvious that Bernard Stone is “spitting” on our voting rights with his dismissive appraisal of the convictions.

Lastly, does anyone really think Bernie Stone was utterly unaware of what these criminals were doing for him? Please. If you believe Stone knew nothing about it, I have a bridge to sell ya.