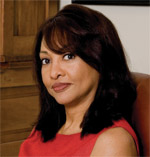 Welcome once again to our top ten most left-biased working journalist list and now it’s time for number five in the countdown. As we begin our downward slope to the number one most biased, it is fitting that we come to The Atlanta Journal-Constitution’s Cynthia Tucker as our fifth worst, most biased American journo.

Unlike the other left-wingers that merely hate conservative Americans, Cynthia Tucker seems to hate all of us. That seems true at least if her latest outrageous comment on MSNBC can be taken for granted.

In recent comments made on Chris “Leg Tingle” Matthews’ MSNBC show, Tucker said that, unlike the Cold War days, today’s American enemy is “us.” Naturally The Tingler chipped in with a hearty “exactly.”

Expounding upon her claim that we, each of us, is an enemy to the country, Tucker went on:

And one of the differences between the ’50’s when Sputnik was launched and now, that was a battle against Communism. It’s always much easier to rally Americans against an external threat, an external enemy. In this case, the enemy is us. Americans are addicted to petroleum. We use way too much oil. So it’s a little harder for the president to turn around and call on Americans to sacrifice. You remember what happened to Jimmy Carter when he did that.

Carter? One of the most failed presidents in American history comes in for praise? From Cynthia Tucker he sure does. She should know. She’s an expert.

Now we can all easily see that Tucker is a political history savant. Why, not long ago Tucker was busy on MSNBC telling us all in her inimitably brilliant way that Congress was “dominated by Republicans” in 2007. Sadly, no one bothered to inform her that the Democrats took over control of Congress in 2006 and by 2007 had one of the largest Democrat majorities in decades. So much for her grasp of even recent history.

Tucker fancies herself an economics expert, too. In April, she informed us that only government spending could save us from depression and lamented that Obama didn’t have a more “robust” stimulus. “Ironically,” Tucker assured us, “a more robust government response to the recession would have saved more jobs.” Really? Then why isn’t Greece the most “robust,” employed country in the world?

So with her perspicacity now fully ascertained we can move on confident in Tucker’s analysis, right? So let’s find out what this deeply philosophical thinker feels about you tea partiers, shall we? Would you be surprised that she thinks you are all racists? I didn’t think so.

In fact, she feels that between 45 and 65 percent of tea partiers are racists. That figure was “just off the cuff,” of course.

Naturally, Tucker also thinks that only racists oppose Obama’s socialist healthcare policies, its price tag billions and billions higher than its proponents claimed, and its destruction of so many industries and businesses, not to mention the thousands of new rules and regulations that will pile more costs onto everyone. In fact, in a Sept. 2009 column, Tucker said exactly that.

Many commentators, political analysts and fellow Democrats share Scott’s view that some part — perhaps just a sliver, perhaps more — of the right-wing assault on President Obama’s health care reform plans stems from a deep-seated racial antagonism toward the president. Count me among them.

I’ll bet you didn’t realize that when you stood against Hillarycare in 1993 you were a “racist,” did you?

Like so many black journalists that pander to a racemongering audience, though, the bulk of Tucker’s work is filled with beating that dying horse. Naturally, only Republicans come in for the epithet.

Just as naturally, Tucker talks out of both sides of her mouth on the issue of race, too. In March, for instance, Tucker said that racism is “a reflection on the Grand Old Party,” yet but a few months later she was saying that the only reason the GOPs black Party chief Michael Steele wasn’t fired is because he was black. How a party can be so racist yet won’t fire a black party chairman is a bit hard to understand.

Further, how can a party be so racist, yet elect an African American party chief in the first place? For a thoughtful person it would be a bit hard to reconcile the two. Thankfully, Cynthia Tucker does not have the limitation of logic to get in her way.

But racism isn’t the only hurdle that America can’t seem to mount according to the brilliance of one Cynthia Tucker. There’s also that old bugaboo of sexism. Women just can’t get a head in this darned ol’ country, Tucker says.

It’s so bad, Tucker posits, that if Obama’s Supreme Court Justice nominee, Elana Kagan, doesn’t ascend to the court, then it is because of “latent sexism” in America. Let’s set aside the fact that we’ve had women in nearly every position in America’s power structure except president and vice president and let’s ignore that we’ve already had three previous female Supreme Court Justices. No it’s got to be “sexism” that will keep Kagan off the bench. Yes, it’s obvious that woman just can’t get ahead in America today, isn’t it?

Well, if reality so rudely intrudes on your perception, we should be glad that Cynthia Tucker does not have that problem.

And so, free of all those annoying encumbrances of logic, a command of history, and veracity, Cynthia Tucker has won a spot on our list of most left-biased American journalists. Congratulations, honey, you’re in.

Please check back tomorrow for left-biased journalist number four in our series.