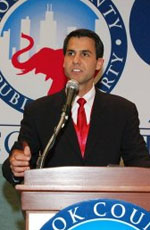 This story has been building for weeks on HillBuzz.org, but the reporting there was often iffy, hazy, and speculative, so I didn’t write about it myself. But this week things have come to a head proving the allegations had some merit because now Cook County GOP Executive Director Jeremy Rose has resigned over the allegations of sexual harassment leveled against him.

The story goes that on June 17, 2009, a woman was attending a Chicago Young Republicans meeting in Chicago and when she made to leave for the night was prevented from doing so by Rose. Rose began touching the woman in an unwelcome manner, allegedly took away her cell phone to prevent her from calling a cab, and then sat on her lap to prevent her from leaving. Rose proceeded to suggestively converse with her until she was finally able to extricate herself from the situation. The woman felt threatened and harassed and filed a complaint.

This is all bad enough, but Cook County GOP Chairman Lee Roupas did nothing after being made aware of the allegations. In fact, just the opposite. Roupas promoted the offender to higher positions in the Cook County Party establishment until he was at last appointed Political Director.

And that doesn’t end the obfuscation of this event by Cook County Party chief Roupas. It is also alleged that when this situation started to filter out to the party establishment in Chicago (there is both a Cook County GOP organization and a City of Chicago GOP organization both based in Chicago), Roupas tried to obscure the whole mess and actively began attempts to undermine the city party officials looking into the whole thing.

When Chairman of the Chicago Republican Central Committee Eloise Gerson wrote a letter to Cook Chairman Roupas demanding that Rose resign, it is alleged that Roupas launched a campaign to undermine Gerson and get her replaced. Roupas attempted to engineer a vote in an “executive session” of Chicago Ward Committeemen to have Gerson replaced but failed to garner enough votes to do so.

Many political reporters out there are saying how this is a poison pill for the state GOP in this election year where the GOP is surging in the rest of the country. Me, I doubt it will be that big a deal breaker for voters state wide. After all, when people hear the words “Chicago Republicans,” or “Cook County Republicans” the most common reply is “ARE there any such people?”

In fact, if this story goes large in the state I’d guess it would be the first time most people would even become aware that there are Republicans in the City of Chicago and/or Cook County. I’d imagine that most people’s reaction to this will amount to a big “whatever.”

Still, it shows several things all of which are disheartening to the few Cook and Chicago Republicans that are out there. It shows that Lee Roupas was apparently too young and immature to take the high office he was given (Roupas is a young 27-years-old), and that the Cook GOP is not a serious organization. Apparently no one had the sense to counsel Roupas on getting out from under this mess sensibly and everyone stood by as he spiraled out of control with an increasingly conspiratorial reaction to this incident.

As I said, most people will jus laugh and chalk this up to just another example of how feckless Republicans are in Chicago and Cook County. It will reaffirm most people’s opinion that the GOP in the city is a joke. But it didn’t have to be this way. So, once again we have to treat the Cook/Chicago GOP like we do the Chicago Cubs: wait until next year.

Sadly, THIS year should have been the year that Republicans in Cook County and Chicago could have made some headway. Instead we get farce… yet again.