New Captain America Movie: Dear America, I'm Just Not That Into You 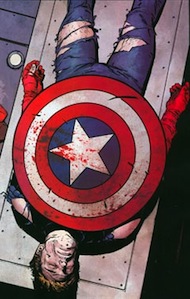 A few months ago I wrote an expose on Marvel’s Captain America comics number 602 in which the writers and artists of the book portrayed Captain America saying that Tea Party groups in America are racist and dangerous. It looks like the makers of next year’s Captain America movie in Hollywood have taken that Cappy-against-America theme for its new movie, too, because according to the film’s director this film will feature a Captain America that is “not a flag-waver.”

Comics fans have been eagerly awaiting the expansion of Marvel’s comics-based films with the ultimate fan dream of having a movie based on “The Avengers” comics — a series that teams Captain America, Iron Man, The Hulk, Thor, and several other heroes into a single fighting force. To get to that ultimate comic movie extravaganza, filmmakers are working up to it by introducing characters in stand-alone movies first. Iron Man was the first step toward that goal, with Thor and Captain America coming next.

To get the fans tongues hanging out in anticipation, Captain America director Joe Johnston is revealing some tidbits of info on the flick at this year’s Comic-Con international convention in San Diego, California. Johnston says that his Captain America won’t be any simple-minded, sloganeering, “flag-waver.”

“He wants to serve his country, but he’s not this sort of jingoistic American flag-waver,” Johnston said. “He’s just a good person. We make a point of that in the script: Don’t change who you are once you go from Steve Rogers to this super-soldier; you have to stay who you are inside, that’s really what’s important more than your strength and everything. It’ll be interesting and fun to put a different spin on the character and one that the fans are really going to appreciate.”

Once again we have Hollywood taking a classic, super-American character and turning him into a self-loathing, anti-hero.

It’s bad enough that Democrats forced the filmmakers to flee the country because California as well as the U.S.A. is simply too expensive to film in, but now we have those same denizens of Hollywood gutting the patriotism of a true-blue American character.

So, what will we have? We’ll have a Captain America that is filmed in a foreign country that fosters a suitably un-American loathing for the very country whose colors he wears.

This alteration of traditional comics characters isn’t new, of course. Back in 2006 with the re-booted Superman film directed by Brian Singer, news came out ahead of its release that Superman would no longer be touting “truth, justice and the American way.” That whole “American way” thing had become gauche as far as director Singer was concerned. He wanted that “America” thing excised. Later in 2007 when a G.I. Joe film was in the planning stages the producers announced that G.I. Joe would no longer be an American fighting man but would be an “international” soldier instead. Also in 2007 a British paper complained that the then just released Spider-Man 3 movie had the gall to show an American flag at the end of the picture. And just this year Archie Comics decided to introduce a gay character to “update” its storyline.

The obliteration of traditional comics characters seems to be running apace with Hollywood’s desire to denigrate America.