The website for the Illinois Reagan Centennial Commission seems to be about complete and running now. It can be seen here: http://www.illinoisreagancentennial.com/index.html.

The effort is being run out of Reagan’s boyhood home of Dixon, Illinois. Dixon is west of Chicago a few hours north of I-88 and is the town that Ronald Reagan lived in between 1920 and 1932.

The town has some great festivals, meetings, walking trails, and other events scheduled to celebrate Reagan’s life through 2011. 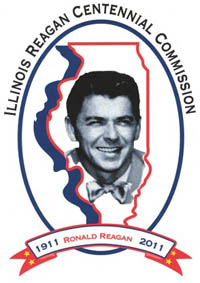 But being the old graphic designer I am I have to say that the new logo for the IRCC is just plain bad. It loos like something that was designed on 1911! It’s seriously bad. The key to how bad it is shows most when it is reduced. A good, snappy, catchy logo should still work when reduced to a small size. But when this one is shrunk down it is indiscernible as, well, anything.

This is bad, bad design.

Oh, well, that’s small town America sometimes. Not exactly on the cutting edge of graphic design, if you will.

I have been emailed by the commission and I had the info on who is hosting this effort incorrect.

For clarification, in reference to your article in Publius Forum (Chicago Now) June, 2010, about the Illinois Reagan Centennial Commission, the commission was formed as a result of H.R. 418, May, 2009 by the Illinois House of Representatives in Springfield. The Reagan Boyhood Home in Dixon has nothing to do with running the commission. It is a bi-partisan committee with 4 Illinois representatives, Rep. Jerry Mitchell, Rep. Keith Sommer, Rep. Frank Mautino and Rep. Jack Franks (2 Republican and 2 Democrats).

So, there you have it. This effort is an act of the legislature.